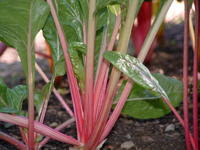 It was a very poor year on the allotment this year. I planted some things in April and May when the weather was warm and dry, but throughout June and July it rained almost without stop. There's not much you can do on an allotment when it's bucketing with rain. When it was merely drizzling we didn't go because we couldn't make the kids sit in the rain whilst we worked. And on the precious few occasions when it brightened, we took the opportunity to take the kids to the beach or the park. So the weeds grew unhindered and the slugs and snails feasted on the few crops we did plant.

But we had a few successes - spuds and onions did well this year, and we somehow avoided the blight which struck many other allotmenteers. The mystery summer squash is tasty and productive, even if I don't know what the heck it is. Various types of beans did OK, but not peas.

Ruby chard was a great success. I've never grown it before, but somebody gave me a bunch last year and it was delicious so we decided to give it a go. It was easy to grow, and is very tasty and incredibly nutritious. It's taste is somewhere between cabbage and spinach, although actually it's more closely related to beets. That makes it a useful green leafy vegetable for people whose land is hopelessly infected with clubroot, so they can't grow any brassicas at all.

Chard doesn't store very well, so you just cut what you need as you need it. You can eat the stems, but they are tougher than the leaves, so I tend to strip them out and fry them in a little butter, then recombine them with the steamed leaves at the end of cooking. I'm sure you could make it the star of a meal, in the same way that spinach can - chard and potato curry would be good I'm sure, or cannelloni stuffed with chard and ricotta cheese, or a chard and parma ham pizza. But I mostly use it as a delicious side vegetable, steamed and served with a knob of butter and lots of black pepper.
Posted by Melanie Rimmer at 8:20 am

The other useful thing with chard is that it stands all winter, so you can keep it until it goes to seed in late spring, by which time the new season's crop is nearly ready.

I think of the stems as being the main part to eat though - I mean, I do eat the leaves when they are young, combining them with the stalks as you do (usually I cook the stalks in butter like you, then put the leaves on top, cover and leave for a minute or two - saves an extra pan) but when they get a little old and tough or holey, I discard the leaves and eat spinach instead.

There was something very comforting about reading your allotment experience for this year, because my garden produced very little for roughly similar reasons, and I was beginning to berate myself for laziness as well as incompetence. But there's always next year!

I've never eaten chard, as I reading though I was also thinking how nice it would be in a potato curry! Might need to be on the plan for next year.

i grew swiss chard for the first time this year and was extremely pleased with the results. It seems to be a fairly low maintenance crop. I think it is also very pleasing to the eye, something I will bear in mind for bedding in my garden next year.
Cheers Keener