Everything I Know About Environmentalism, I Learned From Star Wars 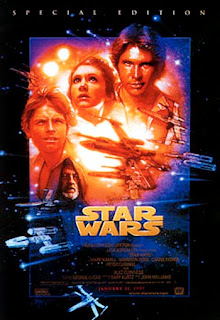 1. It's all about balance. Anakin was prophesied to be the "one who would bring balance to the force", but the Jedi didn't realise he would do this by weakening the light side and strengthening the dark side. In the environment balance is also desirable, and problems occur when humanity disrupts the natural equilibrium.
2. Man-made objects aren't inherently good or bad, it depends on what they're used for. General Grievous and his droid army were bad news, but R2D2 and C3PO are goodies. Similarly cars, air conditioners and airplanes aren't the enemy, as long as we can use them wisely.
3. C3P0 said "It's against my programming to impersonate a deity." If only humans were so wise!
4. The ewoks with their neat tree-houses (I really wanted to live in one of those!) and slingshots managed to overcome the Federation stormtroopers. Likewise, I believe that a well-coordinated bunch of treehuggers can achieve their aims despite opposition from governments and corporations.
5. Everything is connected. The Force is an energy field created by all living things. It surrounds us and penetrates us. It binds the galaxy together. Well, in the Star Wars universe it does, anyway. In our universe all life is connected too. The Victorian ideas of a hierarchy in nature - top predators, food chain, the ascent of man - they're not true. Tigers aren't the top of the food chain because fleas drink their blood. Does that makes fleas a top predator? In fact everything depends on everything else, so we need to save the plankton just as much as we need to save the whales, and we need to save the fleas as much as the tigers. Or to put it another way, there's always a bigger fish.
6. Shmi Skywalker (Ani's mum) said "You can't stop the change any more than you can stop the suns from setting." Another word for environmentalism is conservation. But we shouldn't aim to preserve everything exactly the same as it is today. That would be unnatural.
7. Size doesn't matter. Yoda was small but he kicked butt. Never think you're too small to make a difference.
8. Don't underestimate the power of the dark side. Big corporations are stealing green clothing. Petrol companies are changing their logos to green leaves and flowers, chemical companies are planting trees and supermarkets are putting solar panels on their roofs. But are they really changing their ways, or are they just adopting highly-visible tokens of eco-friendliness. Are they still raping the planet behind the scenes? Find the facts. Don't be fooled by the marketing.
9. It's never too late to change your ways, and sometimes your children will show you the way. Darth Vader became Anakin again because of Luke's courage. And even hopeless petrol-heads can see the light.
10. The rebels can defeat the Federation. A small band of committed people can bring about change for the better. All it takes is dedication, organisation, loyalty, faith, courage, and a heap of junk that can make the Kessel run in less than twelve parsecs.
Posted by Melanie Rimmer at 10:23 am

And where does that little *insert own expletive* JarJar Binks fit in?

"Where does JarJar Binks fit in"

Things that annoy us don't always need to be killed?

I'm sending this off to the hubby, he's often shaking his head over my newly "green" ways, and only really joins in when there is something sufficiently geeky to enjoy about the project. BUT, seeing as he made custom royal blue lightsabers for our wedding, this might just hit him where it hurts!

Followed Joanna's (Food) link to this post! It's great. My sons are huge Star Wars fans so it made me laugh. We try to be as green as we can. Well, actually not as green as we could be because there's always more that you can do but we do try...

We visited a Roman site in the North East of England a few weeks back, and met an' experimental historical ceramicist' whose hobby was recreating ancient ways of making & firing clay (hang with me, there is a relevant point to this). He quoted some amazing temperature that his earth kiln can reach and explained that it was cool to the touch on the outside even during the peak of the firing, whereas the insulation material used on the space shuttle had cracked at temperatures lower than that. "They should have lined the shuttle with peat. It wouldn't have cracked!" he said with a smile. I can't watch a Cape Canaveral launch now without thinking of him.
And if you missed the relevance - it's spaceships. Obviously!!

As a starwars fan I just have to pick holes and nitpick here (and yes, you can blame kethry for this :D. I am her other half by the way :))

point 1) classical jedi philosophy understood that the force was in balance when there were no darkside players. And Anakin was the one who brought balance to the force in that sense (after erasing and killing half the galaxy and being 20 years late but hey)

point2) the droid army can be argued for was neither good or bad. They were controlled by the viceroys of the trade federation who deployed them for an evil purpopse. If the viceroys had given them spades and plantingthingy tools ..imagine the wonders they could have achieved.

point 3) However C3PO does impersonate a Deity after he gets gangpressed into it by Luke.

point 4) Another group of three huggers (wookies living on Kashyyyk) got their planet basically wiped out by machines (planetary bombardement after episode III) and they get all sold into slavery.

I couldn't resist this tho .. I can't actually refute the meaning of the post but I can do by the letter :)

Loved this post! We are big Star Wars fans at our house, and striving for continuous improvement in treating the earth well. I loved that you brought them together.

And I agree with Jenna - things that annoy us (and may I add, sometimes wreak havoc) don't always need to be killed. I'm thinking spiders in the house fit this category as well as Jar Jar.

Hey, Heather! What's this anti-spider thing? Living in the heart of the countryside, my house is a shelter for spiders of all shapes and sizes, for web-spinners to hunters, and all are welcome. They eat the baddie insects that eat my home and spoil my food so, for me, they're welcome whenever they come.

This is an awesome post! Like Jenna, I can't wait to forward it to my husband, who is a huge Star Wars geek. We didn't have light sabers at our wedding (although he'd have loved it) but he did make a little film with his buddies called, "Reservoir Jedi," a cross between Star Wars and Reservoir Dogs.