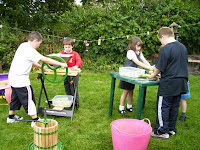 "Who wants to help pick some apples and make them into apple juice?"

Eleanor, Sam and I headed next door with my longest ladder, a broom and a large bucket to collect apples. We were soon joined by some of the local urchins who were keen to catch the apples I was knocking down, and offer some tips of their own.

"Yes, chucking your tennis racquet into the tree is an effective way of bringing down the apples. I remember from when I was ten. But it runs the risk of damaging the tree, and then the people who live here won't let us pick their apples any more."

I had some strange conversations with my helpers. 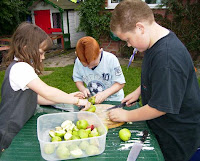 Once we'd cleared that up we weighed the apples with an antique brass spring balance Steph gave me (thanks Steph - it beats standing on the bathroom scale whilst carrying the apples, then subtracting your own weight from the results) and found we'd collected 19lbs (about 8.5kg) of apples. 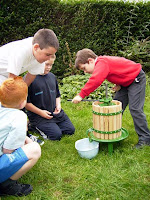 The urchins joined in with cutting the apples into quarters and tossed them into the crusher. More odd conversation occured at this stage.

"Why do they have sweetcorn in them?"
"Let me have a look - oh, you mean the pips"

Then we had a go at running the crusher, after I had given them a graphic description of what would happen to any body parts that entered the hopper.

The crushed apples then went into the press, and again we took turns at operating the press whilst we all watched the brown cloudy juice run into a bowl.

The labourers were rewarded with a drink of apple juice. Just a

small one though as the bulk of the juice went straight in the freezer. They all declared it delicious. With any luck I can scrounge up more apples in the coming weeks until I have enough for a batch of cider. You never know, my own army of scrumpers, armed with tennis racquets, might bring me some.
Posted by Melanie Rimmer at 5:13 pm

Aawwwww! I wish that had come on Friday when I was there. I'm sooo jealous now. Do you think there'll still be apples to be had in the October scholl hols?
Is there any other use you can put them to, other than chopping & squishing apples?

Wow, how much did those gadgets set you back??

We have a friend who pasteurises his apple juice, so that it doesn't have to go into the freezer. He does it in the bath, but I've never been able to get the method from him. I'll have another try.

We have another friend who makes cider from his apples, and crushes them using an old-fashioned electric clothes spinner, the sort with a spout at the bottom, which he bought secondhand and then spent a long time rinsing to get rid of all the soap. He then puts the apples into an old pillowcase before spinning out the juice. What a great - and cheap - solution ... hedgewizard, perhaps you could give it a try?

I've had similar conversations with urchins around here, who lean over the garden fence and ask what we're growing. From the first conversation when i had to convince them my 1 by 3 meter bed *wasn't* a grave (they're a morbid lot round 'ere) through to "wots them" (pointing at a sweetcorn plant).. they show a real ignorance of where their food comes from. I've been delighting in showing and telling them otherwise. Even the parents are showing an interest, which is lovely - we live on an inner city estate in east Manchester, so you can imagine the kind of people we have around us! maybe next year they'll be doing it too? i can hope!!