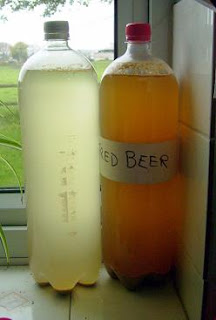 I've still got a little Ginger beer left (from my yeast culture), although we are moving over to Fred beer production (made with the authentic ginger beer plant). I thought I'd show you this picture of the final brews side by side. the Fred beer is on the right. You can see it has a much redder colour. Ginger on the left is very pale in comparison.

There are other differences besides the culture. Fred is fed on brown sugar whilst Ginger has white sugar. That's 8 teaspoons over a week and presumably contributes to Fred's reddish colour. In both cases the final brew is sweetened with white sugar. Ginger has the juice of a lemon in the final brew, which might bleach out a little of her natural colour.

As well as a richer colour, Fred has the better taste, too, which is why we've killed off Ginger. The latest batch of Fred beer is extremely peppery, but the kids still drink it, although Sam has taken to getting a glass of water and a glass of Fred beer. He has a drink of Fred and then takes a sip of water to cool it down a bit.
Posted by Melanie Rimmer at 9:33 am

Horace is still on the go in the airing cupboard. I forgot about him for a few days, so I'm going to continue to feed him over the weekend then bottle him up. Fingers crossed.

Thanks Mel for a great series of articles. Why don't you combine them into a unified post and have a link in the sidebar, for newcomers?

That's an excellent idea, Hedgie. Why didn't I think of it?

Mel, there's a fair few of your posts that would work in that way.