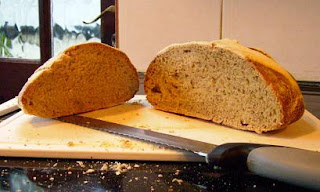 Well I didn't wait until the bread was cold, but it was just warm rather than hot straight from the oven. How did it taste? A bit of a mix - good and bad points. It's certainly bread (rather than a brick of glue like my first attempt), made with only wild leavening, so that's fun. It didn't taste noticeably sour, though. It was white bread, and I'm not a fan of white bread. I tend to find it tasteless. I wouldn't say this bread was entirely tasteless, but nor would I say it was an orgasm on my tastebuds. Closer to "food that makes you go hmmm" rather than "food that makes you go wow!". But I'll keep trying. I'll make bread that makes people go "wow!" soon.

What do I need to change? The Silverton book has recipes that include flavouring ingredients such as olives, walnuts, cheese etc. I'm sure any of those would be tasty. But I want the bread to be "wow!" bread, not "hmm" bread with tasty ingredients. I might get a better flavour with a different starter. I'm still waiting for them to arrive from the States. When they arrive I can experiment, and perhaps that will provide the wow! factor. Or I can try making wholemeal bread instead. I like wholemeal bread much better than white bread (it's fair to say I like wholemeal anything better than white anything. I don't understand why people choose to eat polystyrene, whilst brown rice, wholemeal pasta, wholemeal flour etc. have a grungy hippy image. I like my pasta, rice and bread to taste of something.)

I'll probably try different flours then. Wholemeal flour, rye flour, spelt flour. I'm having lots of fun learning this new breadmaking technique. And these loaves are at least edible, not like my first sourdough loaf which went in the bin. I'll feed some to the kids when they get home, and if the worst comes to the worst I'll make it into cheesey bread pudding.
Posted by Melanie Rimmer at 2:52 pm