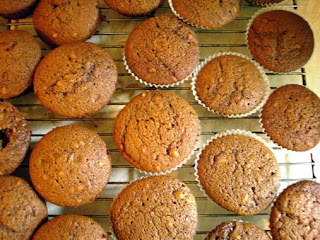 The sediment of the ginger beer plant contained yeast and ginger, so I thought I'd use some to make some yeast-risen muffins. They turned out really well, and the kids have been devouring them. The best thing about the recipe though is the smell as they cook. So don't forget to take a few great big lungfuls and enjoy.

Mix a couple of heaped teaspoons of the yeasty/gingery dregs with half a pint of warm water and one and a half cups of plain flour (all-purpose flour). If you don't have an expired ginger beer plant, you could just add a packet of instant dried yeast and a couple of teaspoons of ground ginger. Let it sit somewhere warm for half an hour or so, it should froth up so make sure it is in a large container or it may overflow. Cream 300g of sugar with 200g of butter, beat in 3 eggs one at a time. Beat in half a cup of treacle (molasses - or if you don't have any, substitute Golden Syrup, or honey, or corn syrup. It'll taste different to mine but it will still taste good). Add two teaspoons of cinnamon, half a teaspoon of bicarbonate of soda, a pinch of salt and a bunch of chopped nuts (I happened to have these in the cupboard. Could as well have been sultanas, chopped crystallised ginger, or just nothing). Mix it well, slop it into muffin tins and bake it at 180C for 25 minutes or so until the muffins are springy and done.

It's a big batch - I made about 30 muffins with it. And sorry for the weird Frankenstein mix of ounces and grams, weighed measures and cup measures. It's a bit of a Frankenstein recipe.

I still have lots of ginger beer plant sediment left, so I plan to do more experimenting with recipes that need ginger and yeast. I was thinking some kind of spicy tea bread next.
Posted by Melanie Rimmer at 9:23 am

Bah.. I was expecting proper muffins.. not Merkin muffins..

Thanks for the recipe, Mel. When we have to split our bug on the next round, I'll make sure and try it out.

Thank you for such a fun idea.

I have to bottle our brew today - so will have a play and try out maybe a ginger beer bread or muffins.

Nice to find your blog!