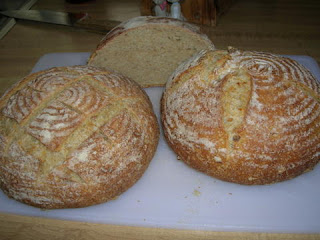 I made bread with my home-made sourdough starter but it wasn't a great success (that's not it in the photograph). My loaf didn't rise well and so was very dense with a gluey texture. The taste was intriguing, though - certainly different from bread made with commercial yeast. I was following the instructions in Hugh Fearnley-Whittingstall and Fizz Carr's book, The River Cottage Family Cookbook, and I think maybe that's the problem - I need a specialist sourdough bread reference.

So I bought Nancy Silverton's book Breads from the La Brea Bakery. It's supposed to be "the I am" of sourdough baking. But I didn't fancy her instructions for making a starter because the quantities were too great - you end up with 7lbs of starter! That's great for a commercial bakery, but crazy for home use.

I decided to build up the starter I have already made, using the principles in the Silverton book, but with smaller quantities. So I have been feeding it two or three times a day, and stirring it in between times, in the hope of making it a bit more active. It's definitely working and today I have taken the plunge and tried again to makebread with it. This time I'm following Silverton's instructions. Again her quantities are too big - I am making two large loaves of bread. What's more, the whole process takes two days. This really is not a book for someone who wants to whip up a little bit of bread for their own family without too much bother. But I've invested in the book and I'm hoping to learn some general principles that I can simplify for my own situation.

I am still waiting for the two starters which a kind person on the Yahoo Sourdough group has mailed me from Florida. I've also ordered a baking stone - that's a heavy stone slab you place in your oven when baking bread or pizza. It recreates the conditions in stone-built bread ovens, and is supposed to make a big difference to your finished bread. And just for fun, I ordered a cane proofing bowl. It's a spiral basket you put the boule of dough in for it's final rise before baking, and it's what give the loaves in the picture their characteristic spiral pattern. It's fun to play with a totally different way of making bread.
Posted by Melanie Rimmer at 12:42 pm

My husband made our starter from Nancy Silverton's recipe. We had this gigantic bucket of this stuff while he was creating it. After that initial time period, though, he cut it down to a reasonable size. Basically, after making bread in the morning, he throws most of it away and just leaves enough for the next day. Otherwise you end up wasting an awful lot of flour.

But it did work, and it gets better every day if you stick with it. Interesting layers of flavors that get more and more complex.

The feeding schedule gets a little annoying at times - but having yummy fresh bread every day makes it worth it.

Due to the feeding schedule, we have named our starter "Audrey" from the "Little Shop of Horrors" plant that keeps saying "feed me, Seymore, feed me." The bread that comes from Audrey we call "Spawn of Audrey." I know, we're crazy.

I have been baking sourdough bread using Nancy Silverton's recipe for the white loaf for about 10 years. I make one loaf at a time using half of the ingredients called for. I weigh my ingredients (6 ounces of sourdough starter, 17 ounces of bread flour, 9 ounces of filtered water, and I substitute 1/8 cup of wheat bran for the wheat germ as that is what I usually have on hand). I add the 2 1/4 tsps salt later on per the recipe's instructions. I used to bake the bread on a bread stone, spraying my oven with water during the first 5 minutes of baking. After making a zillion loaves of No Knead Bread (if you aren't familiar with this 'google' the word), I bake my sourdough bread in a 450 degree preheated 4 quart Dutch oven (no oiling required). I do not use a bread stone and I don't spray my oven walls down anymore. My loaf turns out awesome every time with those wonderful air bubbles. I bake the loaf covered in the Dutch oven for 20 minutes, then remove the lid and bake 5 more minutes until the loaf is about 200 or so degrees.

Hi there, have you ever heard of Nourishing Traditions? There is a recipe for making a sour dough starter and ofcourse a recipe for the bread. Here is a link..something you may like or may have heard of already...
http://www.westonaprice.org/
Cheers,
Kelly

Those loaves look great. Love the spiral. Hope your latest baking turns out like that!

Melinda, you may be crazy but you're not alone. My starter is called Fizz, partly as a description of what she does, and partly in homage to the author of the book I got the recipe from.

Shirley, can you tellme more about your Dutch oven. I always thought it was just another word for a casserole dish. How do you make bread in it? On the stove top or in the oven? Thanks to both you and Melinda for your comments about the Silverton book. That's really helpful.

Kelly, I'll check that link out, thanks.

Stephanie, I hope so too! Baking day tomorrow. Wish me luck.

We put Audrey in stasis (in the fridge) about a month ago when we went to a wedding. She's remained there... until tonight! Your post inspired us to awaken the beast.

Here are our revisions to her recipe to make one loaf per day:

We use a stone, and a clouche as well. Both made a HUGE difference.

(It's a stupidly long link - sorry - it's our blog program. You'll probably have to delete the "returns" to make it work, or go to our blog, go to archive, and click on "Tasty Treats.")

Melinda - I bake my sourdough loaf in a 4 quart round Staub Dutch Oven. You can see and read about this Dutch oven on Amazon. There are a variety of sizes and shapes of Dutch ovens. Sometimes I will use an oval Dutch oven to get a different shape of bread. Using Dutch ovens for baking bread became all the rage when people started making the No Knead Bread (google this word if you are interested in learning about the cooking fad that took the world by storm). That recipe called for a 6 to 8 quart Dutch oven but most bakers discovered that a smaller oven worked better. I preheat the Dutch oven for half an hour at 450 degrees before placing my bread it it. Surprisingly, you do not need to oil the pan. The bread will pop out when done. The Dutch oven simulates a steamed oven - you do not need to spray it down with water. As I mentioned in my previous comment, I bake my loaf at 450 degrees for 20 minutes with the lid on , and then another 4 to 5 minutes with the lid off. Dutch ovens are an expensive investment but well worth it. I see that Penney's now sells a 3 1/2 quart Dutch oven for about $40. I have made hundreds of loavs in my Dutch oven (literally) with no negative impact on the oven. These are pretty sturdy pots and you will not be disappointed if you decide to invest in one. Of course, you can always use it to make stews or pot roasts when you aren't baking breads.

Melinda - I have been nurturing my sourdough for 10 years. I used to be a fanatic about feeding it on schedule but now it is so active that I can 'neglect' it. I pull my starter out of the fridge early in the morning (6 AM) when I want to make bread - usually every other day, I feed it equal weights (75 to 100 grams) of bread flour and water (so it is a little stiffer than Silverton's starter), and in the afternoon around 3 PM I measure out the six ounces I need for the sourdough bread. My sourdough hasn't let me down yet.

Shirley - Matt and I were discussing last night whether we thought it mattered to be so rigid in our feeding schedule. If we're going to be gone all day, we feed "her" :) in the morning only. The bread we make the day after is not as good, but the day after that it's exceptionally good. I'm starting to wonder if it's a lot like watering a garden: frequency doesn't matter as much as consistency. Awesome that you've had the same starter for 10 yrs.

Our clouche seems to serve the same purpose as your dutch oven. It more or less simulates the effect of a wood-fired oven. Really makes a difference on the crust.

Thanks for getting our brains turning, Melanie!

You may be interested in watching this sourdough bread making video. The baker uses a La Cloche instead of a dutch oven.
http://www.breadtopia.com/sourdough-no-knead-method/

is beautiful content. have a backlink this page : http://www.cheapestav.com/archives/343