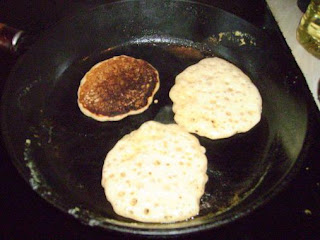 I've been feeding up my sourdough starter, and it's grown pretty big. I don't need this much starter to make bread, but that's OK - there are lots of uses for surplus starter. For example, we've been eating sourdough pancakes.

To a cup and a half of sourdough starter, add a beaten egg, a tablespoon of sugar, a tablespoon of melted butter, two teaspoons of ground salt, two tablespoons of milk and beat well. At the last moment, add half a teaspoon of bicarbonate of soda and beat in, then make your pancakes. (The soda reacts with the lactic acid in the starter and makes bubbles of carbon dioxide. These expand in the hot pan and make the pancakes rise. The end result is somewhere between a drop scone and a crumpet). Drop a dessertspoon into a hot frying pan with a little melted butter. You can probably fit 3 or 4 of these little pancakes in your pan at a time. Cook until golden brown on one side, then flip over. Cook for less than a minute until golden brown and serve hot with syrup. My kids devour them, and my husband is very keen, too.

(If you haven't been following the story so far and you're wondering what "sourdough starter" is, it's a mixture of flour and water which is fermenting. You use it to make naturally leavened bread, without store-bought yeast, although there is "wild" yeast in the starter, along with other microorganisms. You can buy sourdough starters, and you can make your own. I made this one. If you don't have one you can't make this recipe. You could substitute a batter of flour and water and you can make some pancakes, but they won't be sourdough pancakes and they won't froth up as I described.)
Posted by Melanie Rimmer at 8:12 am

When we have pancakes for breakfast, if there's batter left over I add a bit of lemon juice to the mix then make mini blinis in the pan. I'm soooooo looking forward to visiting you at the end of Nov. Sounds like there'll be a very exciting menu lined up.