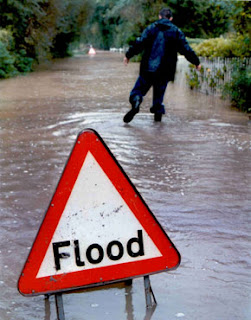 2007 was the year it rained. Non-stop. We had a lovely warm spring, but in May it began to rain and it didn't stop until August. This had a bad effect on our fruit and vegetable growing. Although some crops did well, others suffered either directly from the wet, or indirectly from the slugs and snails and our failure to go to the allotment as often as we should.

We got two colonies of bees from Ally of Ducking for Apples, but they went berserk and attacked all my neighbours, so I had to move them to an apiary a few miles away. We haven't taken any honey from them this year. Due to the weather the bees weren't able to forage as much nectar so their honey stores by the end of the season were low. But our own foraging efforts were pretty good as the weather dried up somewhat in the autumn. We made beer, which exploded, several batches of wine which aren't ready yet, and lots of different types of liqueur.

I became interested in ginger beer, and made a yeast-culture ginger beer plant from scratch. I later learned that real ginger beer is made using an authentic symbiotic culture called ginger beer plant. So I got one of those and now have my own continuous ginger beer production line. I picked wild mushrooms for the first time in my life. I cooked and ate them and didn't die. Which was nice. I haven't had any success identifying other types of mushrooms in my area, though, so I've left them alone. The ginger beer got me interested in other useful microbial cultures, and so I started making sourdough bread using wild yeast rather than packets of dried yeast from the shop. There are other types of useful culture, such as kefir and tibicos, and I'd like to try those in future.

I'll be glad when 2007 is over, just because of the ghastly weather we've had all year. The rain has been heavy again in November and December, and often when I've been out driving I've had to slow right down to go around puddles that cross both lanes of a dual carriageway. There are what look like ponds in the middle of many fields which should be dry, but they have had a standing puddle so long the grass underneath must be dead by now. I know there's no logical reason to imagine that on 1st January 2008, the sun will come out and everything will be different. But psychologically it feels like it might.
Posted by Melanie Rimmer at 10:08 am

It has been a productive year for you in many ways; finally making bread you love instead of Dwarfbread. And, as you said, getting started with the bees, and with wine & beer making. Don't forget the long term - lemon vodka!
I love your idea of doing a sum up around now. Although my blog's not been going quite a year yet, I may do the same.

Sorry about you terrible weather. He had the polar opposite, we had no rain for months and we are still drought stricken. Best wishes for the New Year!

...and we are having some fantastic frosty mornings which will kill off lots of nasty beasties and ensure thriving crops for 2008!