I'm Gonna See All My Friends 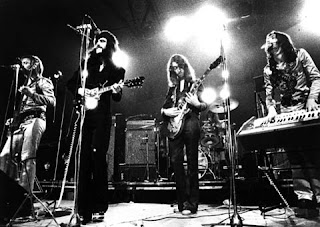 Just got back from Cropredy 2008. To all those who missed it - I hate to do this to you but it was an absolute corker. Unbroken glorious sunshine, fantastic bands, interesting stalls and yummy, varied food, the usual great organisation, plus a few new extras.

Jools Holland played a fabulous set on Thursday night, and Richard Thompson was his usual stellar self on Friday, after Fairport played the whole of Liege and Lief with the original line-up (so far as possible). Dave Swarbrick was amazing. He's a new man following his transplant op. The last time he played Cropredy, he was wheeled on stage in a wheelchair with an oxygen tank behind him. This time he walked on, played standing and bopped about with the best of them. Needless to say his playing was peerless.

Cropredy festival now has a fringe. The two pubs in the village booked several acts (including some of the bands who performed on the main stage last year) and put on their own concerts. Also there was a huge screen behind the main stage on which they showed live images of the band, the crowd, and some cheesy videos (the one for Hiring Fair was especially cringe-able). It was great for a shortie like me, who has never really seen much at the concert, to be able to see what was going on onstage.

The highlight, however, came on Saturday night with the video for Matty Groves - in Lego. If you don't know what I mean, it was done in a similar style to The Brick Testament. Simon Nicol sang it absolutely deadpan, although the audience were all hooting with laughter at the video. They followed it up with the usual medley, played with even more energy and zip than usual, and the drawn-out ending was thoroughly silly and fun. I can't imagine how they're going to top it next year.

The only disappointment, for me, was the large number of absent friends. Our family met up with my sister Lindsey and her husband Andrew, and Lindsey's friend Steve and his kids, and we had a great time. But we missed Steve H., Jim and Catrin, the Roses, Shona, Ford, Christina and Alan, and especially my sister Steph who couldn't make it this year. Please, guys, do your best to make it next year. "Meet on the Ledge" just isn't the same without you.
Posted by Melanie Rimmer at 3:32 pm

Ahh.. the wonderful Dave Swarbrick.. "Play us something in waltz time for a change Dave!" - "This is a f*cking waltz. It goes-" (tapping foot with each word) "-one, two, f*cking, three"..

I've always thought it sounded fun - and it obviously is. Thanks for writing it up ... maybe next year!

Sounds brill. My 1970-vintage Leige & Leif is gathering dust, unplayed for many years (haven't actually got anything to play vinyl on any more!) but I still have a soft spot for Fairport.

We went to Nantwich "Acoustic & Unplugged" last year and that was good. Lovely setting right by the canal and some cracking good bands.

I would have loved to have been there, but I was woking that weekend. The weekend before though I travelled with a friend from Shropshire to Suffolk playing Leige and Leif on the CD most of the way!

whooop whooop!! i went to it was bloomin marvelous.
richard thompson was fantastic. I've added some videos to my utube account if u wanna see them, they r not great quality but they're ok.
http://www.youtube.com/jodiebakesalot
i love your blog!
x