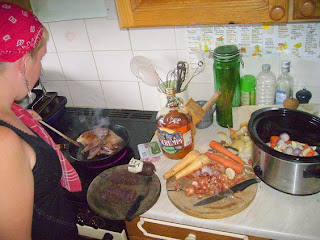 Brown the rabbit in a frying pan with some butter. Place in a slow cooker or casserole dish with one chopped carrot, one chopped parsnip, one chopped onion and a few peeled shallots. That's just what we happened to have knocking around. You could use potatoes, turnip, swede, leeks, celery, the possibilities are endless.

Also add about an ounce of chopped pancetta and half a black pudding, sliced. Again - this was just what we had in the fridge. You could substitute bacon, chorizo, ham, sausage or anything like that.

Finally add a dried bay leaf and some fresh thyme (or rosemary, marjoram or whatever you have) and about a pint of scrumpy (or real ale or stock or wine - you get the picture).

Cover and cook in a moderate oven for roughly two hours, or until the rabbit is cooked through. If you are using a slow cooker, cook on high for an hour and then on low for five to seven hours.

1 Not dressed in blue waistcoats with buttons. It means they've been feathered, skinned, and had their guts, head and feet removed. It means something similar to "oven ready".
Posted by Melanie Rimmer at 9:34 am