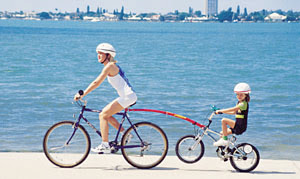 I've taken my bike for a spin with the Trail-Gator attached. A quick explanation - the Trail-Gator is a telescoping pole that fixes to the seat-post of the adult's bike. It can then be extended and quickly attached to a mounting that you fix to the front of the child's bike. The adult can then tow the child and the whole thing pivots, kind of like an articulated lorry, when you go round corners.

The process of hooking the two bikes together, or unhooking them, is very quick and simple and requires no tools. When the bikes are unhooked, the pole telescopes down and clips to the frame of the adult bike, out of the way. So on a long journey you could tow the child a while, then let them cycle a while, then tow them a little more, hooking and unhooking when necessary without too much trouble.

If you have a look at the Trail-Gator website hopefully all will become clear, or just look at the pictures with this post which show it in action.

Getting the thing fixed onto your bike in the first place is a bit trickier. The explanations are extremely clear - in retrospect. Beforehand there is 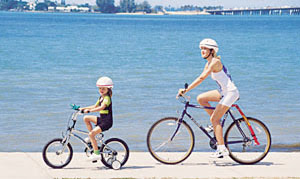 much scratching of the head and peering at the photos on the box to figure out what it all means. I am no mechanical genius, but I'm not a total numpty either, and I managed it. It also involves taking apart parts of the bikes I had never considered taking apart before. For example, I had to remove Sam's front wheel entirely, and disassemble my rear brake assembly. If you're a bike nut, it'll probably be no trouble at all. I'm not a bike nut and I found it a bit daunting, but I got there in the end.

So how does it ride? I've only taken it up and down the crescent a few times, but it seems OK under those circumstances. It's heavier than cycling alone, obviously, and getting underway from a standing start is harder. The child has to sit fairly still - if they sway from side to side, or waggle the handlebars violently, the whole apparatus wobbles and the adult has to use their weight to keep it all upright and going in a straight line. And you have to drum it into them not to apply the brakes, because that gets 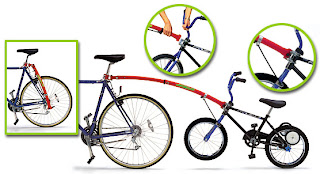 I've also found it a problem that it's attached to the seat post because I'm a stumpy little thing and I had my seat in the lowest position. Now it's slightly too high for me, which exacerbates the "starting from a standstill" problem because my toes are at full reach at the bottom of the stroke.

I'm not ready to take it out into traffic yet, I want to practice a bit more in a traffic-free environment, first.
Posted by Melanie Rimmer at 4:13 pm

Email ThisBlogThis!Share to TwitterShare to FacebookShare to Pinterest
Labels: transport

Fabulous!
BTW. the carving on my blog is "Mistral" and is about 8 ft tall. There was a tiny label, 2 1/2 x 3 inches, which Irfanview managed to enlarge!

yeh we had a tag-along bike - and it was great and a life improver.. but cycling next to a canal, when the monster behind starts to jiggle....nerve racking!

I prefer our Kangaroo trike. It takes both our boys, doesn't have the jiggling and balance issues of many tag-alongs, and the forward cabin is great in bad weather (for the boys, not me!).

Mind you, it's very hard work getting up a 1-in-8 hill with only seven gears - especially when you can't stand on the pedals as you can with a conventional bike.

How does it fair in the stability stakes? Is there a danger it could become twisted if there was a major wobble taking place? What's the turning radius like too? We had a trailer bike at Center Parcs and I always misjudged the turns....