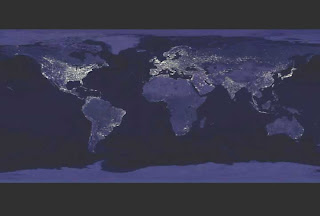 My prediction has already been proved wrong. So far ten people have voted in the Lights Out Challenge poll, and it's equally split between those who never leave the light on, and those who pledge not to do it anymore.

I've been researching a bit about the effects of leaving lights on. I was looking for some figures about how much money we could save if we switched them off, or how much excess carbon we produce by leaving them on. But I got sidetracked when I discovered a website about light pollution.

The picture to the right is a composite photograph from space of the earth at night. You can clearly see densely populated places that glow at night from countless millions of lights. Now being able to see at night is a wonderful thing, and I think that street lighting, car headlights, lighting in our houses and so on are all of such great benefit that the energy is well spent. But shooting all that light directly up to space is not a good use of energy. Our lights should be better targeted, so the lighting illuminates only what we need to be illuminated, not the whole surrounding area. My bedroom window looks towards Manchester, and the orange sky-glow on cloudy nights is a saddening sight.

The lack of visible stars is also a loss. In 1999 we went to Cornwall to view the solar eclipse. I was heavily pregnant with Eleanor and so made regular night-time trips from our tent to the toilet block. At 2am I noticed the sky. My God, I had no idea there were so many stars. I had lived in the city my whole life, and had probably never seen a star with a magnitude less than about 2 or 3. The eclipse was a wonderful phenomenon, but that view of the cloudless night sky was just as memorable.

It is also believed that light pollution may disrupt the lifecycles of animals such as insects and birds. Many people are familiar with midnight robins, who sing under streetlights, mistaking night for the day. And everyone knows that moths and other night insects will gather around a light. When the night is filled with lights, what effect does this have on their behaviour and lifecycles? Bright lights are thought to confuse migrating birds and hatching sea turtles. And of course, astronomers hate light pollution.

I will find out about the cost and the carbon implications of leaving unneeded lights on at some point. But until I do, reducing light pollution is another compelling reason to turn the lights out.
Posted by Melanie Rimmer at 8:00 am

Hi
I had missed this lights out poll - so have now voted - not so time consuming as the carbon footprint poll, which I was planning to do!
TopVeg

I lived in Devon at the time of the eclipse. We often camped in Cornwall though, and the stars there were amazing. They are here too ... only now I realise why some visiting friends from London brought their telescope with them to rural Ireland ... seeing Saturn was mind blowing.

Because I live in a rural area, I gratefully enjoy seeing the stars, inspite of the glare of the lights over the mega-jail across the lake. A friend of mine has family that live in a deliberately light-free development in Michigan. There, crime rates are down and there is some research to back that up, apparently, because street lights and outside lights were intentionally not automatically put in. I'll have to ask my friend for more info!

Stars, what are they? Just kidding - but I do live in a city so I only get to see them when I am out camping. It wasn't so bad when I was a kid though, I used to lay in the backyard with a sleeping bag and binoculars and watch for shooting stars - I haven't done that in a long time but I image it isn't as easy to see anymore.

Where I live we have little light pollution, and a year or so ago we had a guest who had never been out of the city. He was desperate for the loo but ended up peeing in the garden because he was so dumbstruck and in awe of the night sky here.

I moved from Liverpool to deep in rural Ireland and one of my constant joys is the sky at night. Mind blowing; thought provoking.

We live in a very rural part of Scotland with a good view of the night sky - we've even seen the Northern Lights twice - but even the lights from the village two miles away spoil it somewhat. As for the nearest town (15 miles away) and city (30 miles away), their lights are an every present glowing bloom on the horizon.

The boys and I sometimes get up in the wee hours to spend some time with our telescope, so what we'd really like is a clear night combined with a major blackout!

Light pollution is a very insiduous form of pollution that fails to get the recognition it deserves. It is now well established that it is highly damaging to wildlife, killing off insects in their millions every night. This has a concomitant effect on higher order consumers that feed on then. Environmental organisations have reported declines in insect populations, small mammals, birds, spiders, reptiles and amphibians that mirror the expansion of street and security lighting over the past fifty years. Of course some lighting is necessary, but it should only be applied when necessary, where necessary, and in the correct amounts. Decorative lighting, such as floodlit buildings, monuments, regeneration follies, advertisements, skybeams and lasers should not be tolerated in the present climate of concern about energy wastage, climate change and global warming. Leaving outside lights on all night is also as ludicrous as it is wasteful. Such lighting should be motion operated so it only comes on for a few seconds when it needed. It should also be directed downwards so it does not cross property lines. Furthermore, street lighting does not deter crime. In fact lighting encourages people to behave at night more as they would during the day, so crime rates in illuminate areas will actually go up. You will find our most dangerous areas are actually well lit. I have personal experience of Dhaka in Bangladesh, which has regular power-cuts at night, but compared to an average UK city, criminality is minimal.