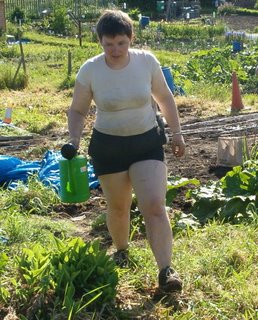 Went to the allotment after the school drop again and spent a few hours digging. Now I've done half the new bed, so by the weekend I think it will be practically finished. That means Ed and the kids can do fun stuff like plant seeds (and help me throw rubble in the skip) rather than endless digging again.

I also planted a couple of well-established bean plants. Eleanor brought them home from school in a jamjar with a bit of damp paper towel, you know the kind of thing. We grew them on at home and now they're the only bona fide green thing on the plot (not counting the rhubarb, which we didn't plant. Or the weeds). No idea what variety they are, so you can bet they'll be the most productive and delicious thing ever but we won't be able to repeat it.

I met the people with the plot next to ours. I'd been told our plot used to belong to a home for people with learning disabilities but they never tended it. It turns out they have an extensive plot, admittedly a bit overgrown but not absolutely neglected, and they came to give it a bit of TLC today. We chatted for a while and they all shouted "Bye Mel!" and waved when I left. I've got to know quite a few people on the allotments and they all seem very friendly. Our plot is right next to the path and close to one of the gates so people pass by all the time, and they often stop to say hello and compliment us on how much we've got done. Which is nice to hear when you've been digging for an hour and the hole looks no bigger than when you began.
Posted by Melanie Rimmer at 2:04 pm

Mel, I'm impressed, though if I didn't read the blurb & just looked at the photos I'd swear you're running a Naturist Colony.
I know Alan Titchmarsh does wonderful things with dug-in newspaper, and I remember he said something about asparagus taking something like 3 years before you get a good crop. I'm looking forward to visiting in a fortnight. I can't get an idea from the photos of how big your plot is, so I'd love some info on that. Hats off to you (maybe not in this weather though)

Hi Steph. The plot is about 8 metres (8 yards) square. At least three-quarters of it had been under plastic sheeting for months so was (mostly) weed-free, and we've split that into 3 beds which we are preparing one at a time. We've moved the plastic sheeting to cover the weedy areas and we hope to cultivate them next spring.

Wow Mel! What a good gardener you are!

I wish I had half your energy. I did have once, but it seems to have disappeared when I acquired the atrial fibrillation.

I hope everything grows wonderfully, that nothing nibbles your greens and that your produce is as big and perfect as you deserve.