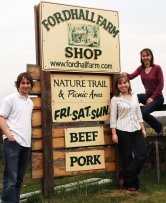 Ben and Charlotte Hollins have raised the £800,000 needed to save Fordhall Farm, the organic farm their family have worked for generations. After the death of their father last year it looked like they would lose the Shropshire farm. They began fundraising, including selling £50 shares in the land to members of the public. They even recruited celebrity supporters such as Sting, and David Bellamy. I've been following the story here http://www.fordhallfarm.com/ after spotting it first on the BBC news website http://www.fordhallfarm.com/

I love this kind of thing, when people get together to save something small but important. When I lived in Liverpool I was peripherally involved in saving the Plaza Cinema http://www.plazacinema.org.uk/ a 1930's cinema which was under threat because out-of-town multiplexes were squeezing its business. Now it is a charitable trust, fully restored, and a central part of the reinvention of Waterloo as the place to go for a night out in North Liverpool.

There's a quote on the Fordhall Farm website: "Never doubt that a small group of thoughtful, committed citizens can change the world; indeed, it is the only thing that ever has" Margaret Mead, Anthropologist
Posted by Melanie Rimmer at 9:55 am

Email ThisBlogThis!Share to TwitterShare to FacebookShare to Pinterest
Labels: news

Wonderful and informative web site. I used information from that site its great. Where to find teen shemales in my state Home mortgage refinancing candler mcafee43 http://www.adult-video-3.info/Legs.html pharmacy allegra