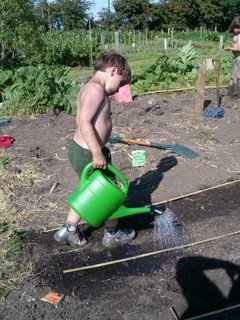 We're into the third day of grey rainy weather. The chicken coop has turned into a bit of a quagmire, and the weeds are coming up strongly in the allotment. The plants are even stronger though so I don't mind, but I'll have to get over there for some serious weeding soon.

I've been getting on with jobs in the house instead. I made some hot redcurrant and chilli jam using another Hugh Fearnley-Whittingstall recipe (from the Children's Cookbook) which is really delicious. I also made gingerbread men with the kids and chicken soup from the carcase of the chicken we had at the weekend. I painted a built-in cupboard Ed made to house the gas meter ages ago, and I reupholstered a dining chair.

What I haven't managed to do is figure out how to upload the photos from my mobile phone into the PC, nor fix my broken digital camera, so I can't show you any of those things. You'll just have to take my word for it. Hey, if I had wanted to lie I would have said I had met Nelson Mandela, run a marathon and played a live gig to hundreds of thousands of people in Hyde Park. But I didn't. Think about that.
Posted by Melanie Rimmer at 4:27 pm

I love that HFW cookbook - perfect for learner cooks like me!

do you have a good gingerbread man recipe - have yet to try making those.

I love it too - even though it's a children's cookbook it doesn't just have patronising recipes for cakes and smoothies, but real food.

Here is my gingerbread men recipe:

Mix together 10oz wholemeal SR flour with a pinch of salt and 1 tblsp ground ginger. In another bowl zap 4oz caster sugar, 2 oz butter and 3tblsp honey (or Golden Syrup) in the microwave until they're all melted (you could do this just as well in a pan). Add the dry ingredients to the melted ones and mix well. It'll be very dry so add enough milk to get a doughy consistency. Roll it out, cut it into shapes and bake for about 10 minutes at 160deg C or until golden.