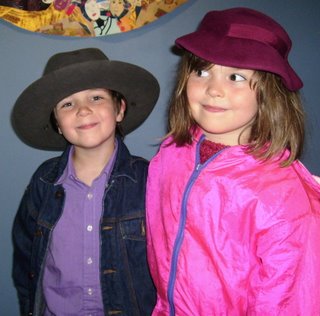 We explored the attractions of Stockport today. You might think that Stockport doesn't offer much in the way of tourist attractions but you'd be surprised. First off we went to the Hat Museum. I must admit that a museum about hats didn't sound awfully promising, but it was really good. As well as the expected glass cases full of hats, information about hat making and hat history there were also lots of hands-on things, such as hats to try on, hats to make, there was a diorama of the Mad Hatter's Tea Party from Alice in Wonderland with empty seats to sit in and have your photo taken, and a yurt you could go inside (not sure why there was a yurt in a hat museum, but hey). We were also given a quiz to complete as we went round, and won a little prize at the end for finishing it. The museum was also free, so if you're in the area I do recommend it.

After that we had a look at the Air Raid Shelters. It cost £15 for us all to get and frankly I found less of interest to the family there than at the Hat Works. On the other hand I can see it must have cost a lot to fit them out as much as they have, with benches and bunk beds, toilets, nurses station and all the rest. They're probably half-way there to making it worth the entry fee. But perhaps I'm jaundiced because the kids got bored and started kicking off which isn't really the fault of the museum. It would have been better if they'd had a few more things like the Hat Museum - photo opportunities and things you can actually touch and try out. Sam really wanted to try the toilet for a start!

We never even got round to Staircase House or the art gallery, so we haven't exhausted the cultural attractions of Stockport yet. Which is pretty impressive, when you come to think of it.
Posted by Melanie Rimmer at 6:25 pm