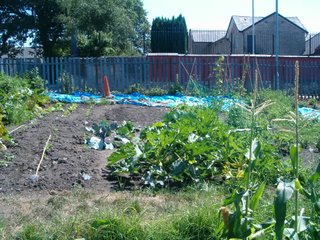 There are a few new feaures on the site. In the sidebar on the right is a poll. This month I'm challenging people to stop boiling a kettleful of water when they only need a cupfull. It's a really easy way to boost your green quotient, it doesn't cost anything (in fact it saves money), and it doesn't take any time (instead it saves time). Vote in the poll and tell me if you're up to the challenge.

You'll have to scroll right to the bottom to see the other changes. First of all is the Rustle The Leaf comic strip which I believe will be updated once a week. Click on the link if you want to view the older strips. Whilst you're at it, you could also click on the One Million Europeans Against Nuclear Power banner and sign the petition. I know it's a contentious issue and some people think nuclear is the best non-polluting alternative to fossil fuels. If that's how you feel, don't sign it, I won't mind!

Down on the allotment I picked a couple of peas. The peas were tiny, too small to pick really but I couldn't resist. I even tempted Tom to try one and he said they were "delightful". I agree - they're astonishingly sweet, downright sugary. It's funny, they're much sweeter than the blackcurrants we picked a little while ago, and far sweeter than the morello cherries.

One of the childhood memories that kept coming back to me when we got this allotment was of a visit to some friends of my parents. They had a pea patch in the garden, and my sisters and I absolutely ravaged it, stripping it of peas and eating them on the spot. I don't remember getting in trouble for it, but I don't remember ever being invited back either. I won't mind if Tom and the other children eat all the peas straight off the plants. It'll just be nice to see them getting vegetables in them.
Posted by Melanie Rimmer at 2:49 pm