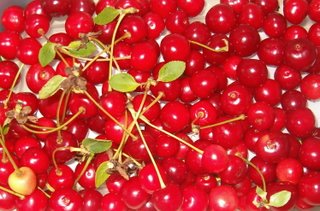 We have a cherry tree in the front garden, but normally the birds eat the lot as soon as they start to show any colour at all. But for some reason this year they have left them completely alone, and today Sam and I went out and picked a large bowlful, leaving plenty of unripe cherries on the tree for later.

They're the sour type so you can't eat them raw but they're delicious cooked with plenty of sugar. Sam helped me make some of them into cherry choc chip ice cream, and I froze the rest to make pie or jam later.

De-stone and chop 1 cup of ripe home-grown cherries. Put half of them in a pan with 1 tablespoon of fair trade caster sugar and warm gently until the cherries are soft, then whizz in a blender until liquid. Add 350ml organic cream, 3 organic free range egg yolks and 100g fair trade caster sugar and whizz until well blended. The stir in the rest of the cherries by hand, along with 1/2 cup of fair trade dark choc chunks. I put all this in an ice cream machine, or you could put it in a tupperware container in the freezer and whisk it vigorously every hour until it is too solid to whisk.
Posted by Melanie Rimmer at 6:53 pm