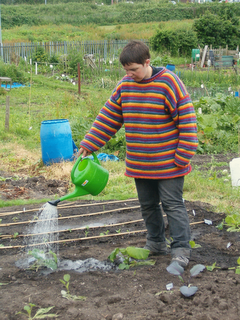 Put some spuds in at the allotment. I thought it was too late for spuds but the nice couple who gave them to us said they'd be fine. We had a bare bit anyway where I'd planted some broccoli and cabbages that never came up, so now we have a row of spuds.

I can hear the red chicken from where I'm sat at the computer and she sounds like she's laying a square egg.

I made Sid's blackcurrants (see http://tinyurl.com/jcs8z) into blackcurrant double ripple ice cream. The recipe is from the book The River Cottage Year so I won't reprint it here. But it's on the River Cottage Website at http://tinyurl.com/zv8ry so if you want to make it you can look it up yourself. If you can get hold of blackcurrants I recommend you try it, it's absolutely delicious and also one of those recipes that look like you spent ages faffing on with difficult techniques, but actually it's really easy. I whipped up the first batch whilst I was also cooking dinner, as an afterthought, that's how easy it is. Of course, Sid's delicious allotment blackcurrants make all the difference, and I had enough for two batches so I've plenty of it. I think I'll save some from Sam until one of my sisters visits, because I'll bet they'd like it.
Posted by Melanie Rimmer at 4:35 pm

I'm waiting for a packet of spuds from a company, to plant July-Aug in a tub, to have fresh potatoes at Christmas. Should be fun!