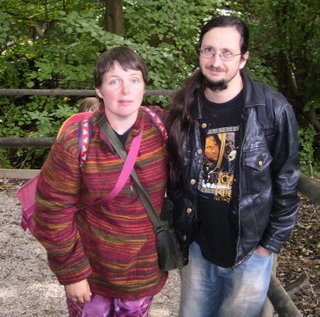 As usual, we had a great time whilst my sister, Steph, and her two children were here. We were having so much fun I didn't get around to describing our visits to Alton Towers (probably Britain's biggest theme park in the grounds of a stately home), the Chestnut Centre (a Derbyshire wildlife centre with otters, owls, pine martens, deer and other species), the allotment, or the local outlet that might buy some recycled cushion covers from me which could turn out to be a nice sideline.

She's gone home now, and Ed's holiday is almost over. But tomorrow is a Bank Holiday in the UK so he has one more day off work, and it's also our 13th wedding anniversary. This year we have agreed some rules for anniversary gifts - they have to cost less than £20, and they have to be second-hand, recycled or hand-made. I've got him some Raymond E. Feist books from eBay because he's reading his way through Feist's complete works the moment. I don't know what he's got for me but I've been banned from the garage all day and there have been sounds of sawing, drilling and hammering coming out of there, and when Ed came out for his lunch his hands were covered in what looked like wood preservative. Hmmm.
Posted by Melanie Rimmer at 4:27 pm