Everything You Know About Going Green Is Wrong 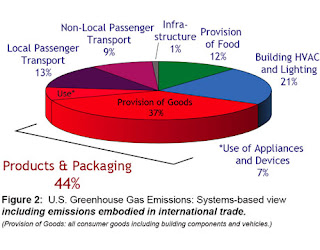 The Daily Green recently posted an article titled Everything You Know About Going Green is Wrong, subtitled "Why driving the most fuel efficient car and buying the most energy efficient appliance matter much less than we think. (Hint: It's all about stuff.)"

It's about the work of Joshuah Stolaroff of the Environmental Protection Agency, who wrote two reports which conclude:

Well, technically I already knew this, and probably so did you. But so many manufacturers and retailers are jumping on the green bandwagon that we are now bombarded with advertising telling us we can save the planet it we buy the right "green" stuff.

But that's not just wrong, it's dangerously wrong. What we actually have to do is buy LESS stuff. This is timely advice with Buy Nothing Day coming up this Friday. And if you haven't seen it yet, take 20 minutes and go and watch The Story of Stuff. It's really eye-opening.
Posted by Melanie Rimmer at 10:07 am

I wrote to the CBI magazine recently pitching an article to discuss planned obsolescence. Much of the Chinese imports we buy are just replicas of real stuff. They are cheap because they do not work, or fail after a short use. My article would argue that British manufacturing should make a comeback with high quality very long life stuff that was more expensive, but would do the job.

I agree, Doc Richard, and I thought about planned obsolescence when I was writing this piece but I didn't quite get it in.

We would all use a lot less stuff if the stuff we had stayed working longer. I have a kettle which is about 20 years old. It is very basic. It is also very stained and grubby-looking. But it works perfectly. My mum used to buy new kettles all the time - she liked flashy ones with blue glowing lights and transparent sides, cordless kettles and kettles you could switch on by text message (I may be exaggerating slightly - but if anyone built a kettle you could switch on by text message I am sure my mum would have been first in the queue at Argos to buy one). Needless to say most of these lasted a few months to a year before they stopped working.

It's a kettle for heaven's sake. It's a waterproof vessel with a heating element and a thermistor. What is there to break down? It saddens me that our inventive geniuses seem to be using their skills to design things badly on purpose, in order to sell us more stuff that is wrecking the environment.

I think stuff is the main downfall. Everyone buys things. A lot of time is is just used for a bit then tossed away. Not even planned obsolescence, just a short attention span or new fashion.

BTW I love George Carlin and his bit about stuff. "Have you noticed that their stuff is shit, and your shit is stuff?" It may not be his intention but he does make you think about how silly we are about our stuff.
http://www.youtube.com/watch?v=MvgN5gCuLac

This does kind of undermine the Tories plan to give people money to buy stuff if they recycle, doesn't it?!

No government will admit it though. There's too much money in consumerism. And not many people will either. Too much pleasure in "retail therapy" and it sounds so much grander to boast about your new fuel-efficient item than to say that you're still using an old one, because it works and it's good enough.