The Wisdom of Eleanor 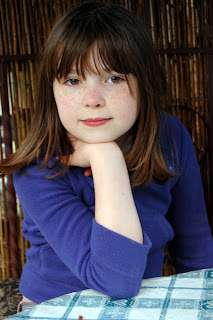 My 11-year-old son Tom was excited about his new video game and boasted he would probably beat it in about a week. his 9-year-old sister Eleanor replied,
"It's just a video game. Even if you beat it in five minutes, you still lose"

Probably best not to remind her of her words the next time she is playing the Sims. I have been known to waste appalling amounts of time on computer games myself, and have a level 80 Blood Elf priest to prove it. But just because it's sometimes hard to live by, doesn't make it any less wise.
Posted by Melanie Rimmer at 9:57 am

Where does that girl get such a wise head?

From your daughter, Bill :)

I was struck by the phrase "beat it" rather than complete it or something like that. It implies they see the video games as conflicts or opponents to be fought against?? So is this weird yoof speak or just this particular game ?

Interesting, Neil. I didn't interpret it like that. My sons seem to view video games as competitions (rather than combatants). They like games where there is success and of course failure. They like to be able to win.

My daughter prefers interactive games like The Sims, which is more like an electronic dollshouse. You just play and play, you never win or lose and the game never ends.

I limit the amount of time they are allowed to play on computer games. But I think sometimes by banning or rationing something you only make it seem more desirable. My youngest two get bored of playing after a while anyway, and willingly do other activities. My eldest would like a USB port straight into his brain if he could, and would play 24 hours a day until he died of hunger, thirst or sleep deprivation.