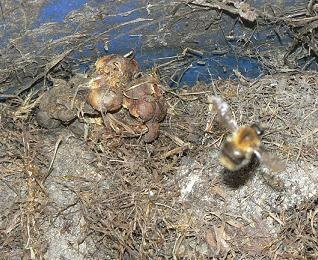 An unusual offer appeared on my local Freecycle group recently; a barrel of bees!

Hi everyone! We have a blue plastic barrel with lid (I think originally a water butt with holes drilled in) which has amongst the old grass cuttings inside it, a lot of bees! ... Being a little afraid of angering them, and not wanting them in our garden near our toddler and baby, I was going to pop the barrel in a big sack and take it to the tip, but thought I'd see if there are any apiarists? (bee enthusiasts) out there who would like to adopt them! Thanks Becky

I replied to Becky's message immediately and said they were probably bumblebees. The next day she went out and took some photos of the colony. From 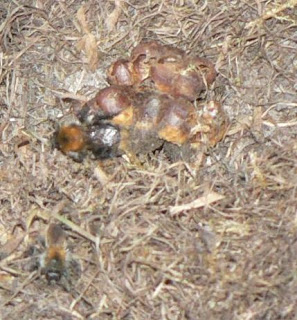 that I was able to tell her they were definitely bumblebees, and although I'm very far from an expert on identifying bumblebee species they looked to me like they could be bombus hypnorum, also known as the tree bumblebee or the new garden bumblebee (or "le bee" by the redtop newspapers). They only arrived in Britain in 2001 from France but have spread astonishingly fast. That was quite exciting and I suggested she get in touch with the Bumblebee Conservation Trust and get their opinion.

By this time Becky was quite interested in her bees, but still unhappy about them sharing the garden with an inquisitive toddler who liked to poke her fingers into the holes in the bee barrel. As a result of her Freecycle offer somebody took the bees to live on a farm near Matlock. And the Bumblebee Conservation Trust told her they were common carder bumblebees (bombus pascuorum) which isn't quite as interesting as having bombus hypnorum in your garden, but still pretty cool.
Posted by Melanie Rimmer at 11:18 am

Yay! Save the bees!

Why would somebody put a bunch of bees in a barrel? I really would like to know~

Rob, I think the bees nested in the barrel voluntarily.

On my local freecycle group they're constantly banning people for advertising livestock. Spoilsports.