Review: Why the World is Full of Useless Things 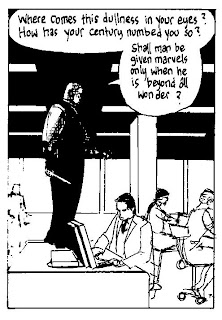 In Alan Moore's From Hell (a graphic novel about Jack the Ripper) there is a chilling sequence where the Ripper hallucinates after the murder of Mary Kelly. He is transported to the present day where he is amazed by the wonders that science and technology has given us, but even more amazed by our own responses to living in a time of miracles. He says

Where comes this dullness in your eyes? How has your century numbed you so? Shall man be given marvels only when he is beyond all wonder?

The same idea is expressed in Why the World is Full of Useless Things by Steve McKevitt, but his book is much funnier than Moore's. The premise of the book is that McKevitt wonders why the 21st century has not delivered the personal jet-packs, affordable space travel and clones of Raquel Welch that he looked forwards to when he was 10. Instead we have QVC, ready meals, Jade Goody and reality TV.

It's a funny book, it's an easy read, but it's not one of those quirky but ultimately pointless stocking fillers you sometimes get (they would be a good example of the sort of useless stuff McKevitt writes about). He really tries to analyse why our world is full of this tat. You'll have to read the book yourself to find out his answer. It's subtle and not easily amenable to summing-up as a neat one-liner. But you'll get a clue if I tell you that the book is divided into four sections: Hubris (thinking we know more than we do and we're more talented than we really are), Ignorance (and why being ignorant makes you vulnerable to being sold useless things), Mind Control (in other words, marketing) and Everything Now! (our ever-shortening attention spans and demand for constant entertainment).

I found it thought-provoking. I've read plenty of books that repeat stuff I already knew about why we should combat consumerism - because it's leading to over consumption, climate change, peak oil, soil erosion and so on. But McKevitt says we should combat it because it's just no fun. As he says in his 300-word summary of the book:

The world is full of useless things because we've made it that way. It's not a bad world, but if only we demonstrated the tiniest amount of collective ambition it could be a whole lot better. The first step is to demand more from ourselves and refuse to settle for facsimile lifestyles that are available in magnolia, beige or vanilla.

By the way, he also includes a 300-word summary of the book created by Microsoft Word Auto-Summarizer. Reading that was one of the laugh-out-loud moments.
Posted by Melanie Rimmer at 10:52 am

I'm gonna buy this - will report back!

This sounds right up my street. It's been added to my wish list!

I'm looking forward to reading this! My partner and I argue all the time about the ostensible "creativity" of marketing. I abhor advertisements and avoid them at all costs, but my partner thinks their "fun."

On a more serious note, but along the same lines, I'm currently reading John Gray's "Black Mass: Apocalyptic Religion and the Death of Utopia." Gray (the philosopher, not to be mistaken with the author of "Women are from Venus...") questions the whole idea of "progress" and claims that every movement that tries to reach a state of utopia, whether political or religious, somehow creates human devastation in its path, making the concept of progress irrational. It's a good read and I guess also emphasizes human arrogance and ignorance.

Thanks for the recommendation.

I need to read this book. If for any reason just to give my world of useless shit a swift kick in the arse. I love my useledss shit!