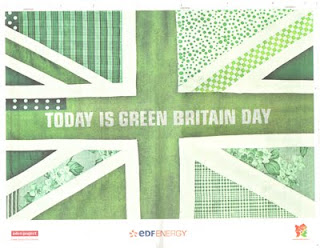 Green Britain Day 2010 is on 17th June, 8 days away. But it seems to be a secret - I only know about it because I have a relative who works for EDF, the company behind it. Even after she told me about it I had a heck of a job finding any information about it on the internet. It's not on the EDF home page. It doesn't seem to have its own website, although there is a website for Team Green Britain which mentions it. My relative tells me it has been advertised on TV and in the national press. Have you seen any publicity for Green Britain Day 2010?

Well anyway, events for Green Britain Day 2010 include Bike Week which runs from 19th-27th June. You can search for your local Bike Week events and there do seem to be a lot of them going on.

There is also an event called The Big Lunch on 18th July which encourages people to have lunch with their neighbours, whether in a small event or a street party or whatever. Sounds like fun, and worthwhile to build up communities. Not sure what it has to do with "Green Britain" though.

The eagle-eyed amongst you will have noticed that neither of these events take place on 17th June, Green Britain Day. So what is happening on that date? I have no idea. I have combed the Team Green Britain website and I have searched the internet for "Green Britain Day 2010" to no avail.

EDF, I am calling you out. Do you get some sort of tax break or something by claiming to have organised Green Britain Day, which sounds like a great idea but in practice is a load of puff? As the great philospher Bart Simpson once said "I didnt think it was physically possible, but this both sucks and blows". It's a shame because I happen to know there is an active group of people working for the company who are really dedicated to improving the environment, and who are imaginative and tireless in doing so.
Posted by Melanie Rimmer at 11:30 am

I saw a poster in the tube on Saturday, meant to look it up, and forgot. Thanks for reminding me!

If you sit staring at the home page of EDF's website for long enough, the orange finally changes to green. But I can't think of anyone who would do that. I only found out because after having a quick glance at the page I went out and made a cup of tea. When I came back, the page had turned green so I watched the whole sequence again. It takes ages, and isn't very interesting.

I work in a school and we usually get loads of info on anything like this but weve had nothing - its a real shame because we could make a big deal about it. Love the site by the way.

Wow, the Bike Week site almost seems to tajke credit for a lot of things that have nothing to do with actaul Bike Week too.. I can see a lot of local stuff organised by completely independent entities anyway, throughout the whole spring/summer.

I'm not hugely impressed with the Big Lunch website either - I saw it publicised last year, but nearly a month before the 2010 "event" and this is the first I've heard of a repeat. And I was on the mailing list last time. Ho hum.

My verification word is "quessin" :)

I think I saw one of these posters at a distance this afternoon. I'll try to get a bit closer tomorrow.

It's just one massive PR campaign and spreading the word that edf are somehow greener than other energy companies (and are they? Who are deemed to be the greener energy companies? I'd be interested in finding out) and also, I think, it's gearing up for the Olympics. Having street party type things and encouraging people into sport make sense.