The future youth addressed all those who reference them regularly, including presidential candidates, Iraq War protesters, celebrities recording public service announcements, and anyone about to inaugurate a new community center.

"Put those silly fears aside," the not- yet-conceived children and their offspring wrote, stressing that, while they appreciated concerns over whether they would have access to clean water or ever see a majestic bald eagle, they'd prefer for those currently living to focus on their own lives in the here and now.

"We'll be fine," Samantha Jacobson, a representative from an uncertain tomorrow, read from the letter at a press conference Tuesday. "It's nice how you're always wondering if your actions will deprive us of a glorious heritage of peace and liberty to look back upon, smiling proudly, but, please, let us worry about that. You've sacrificed more than enough for the future—our future—already."

"Really," Jacobson added. "If the ecosystem gets destroyed or the world is plunged into perpetual war, we'll cross that bridge when we come to it."

Signed by 150 influential members of the two forthcoming coming generations, the statement included requests to discontinue all debate over the potential future of such intangible resources as health, earth's natural beauty, and the ability to sit together at the table of brotherhood. The children's children furthermore asked their soon-to-be ancestors to desist all plans to plant trees or write letters to Congress on their behalf.

"There's been a lot of talk about what kind of world you'll be sentencing us to live in, but, come what may, we children of tomorrow are pretty sure we'll make do," the letter read. "How much damage can you realistically do in one lifetime anyway? In 20 or 30 years any major problems will have blown right over. At the very least, take comfort in telling yourselves that technology will develop a new and ingenious method for counteracting whatever negative impact you do have on our ability to breathe the air, watch the stars, or otherwise live in a world free from fear. Right?"

"Besides," it continued, "we'd never be able to enjoy our precious future lives knowing you had wasted every waking hour recycling beer bottles on our behalf."

The note ended by insisting that, whatever happens, the children's children will harbor no hard feelings toward those living today who simply choose to live their lives without fretting about environmental holocaust.

"You work hard, you pay your taxes—go ahead and use as much Styrofoam as you need," the statement concluded. "Who's to say we won't need big piles of Styrofoam in the future? We might. So go ahead and get that Range Rover, because it shouldn't be the privilege of future generations to limit your right to spacious leg room and all-wheel drive."

The letter has caused a stir among commencement speakers, mayors with plans to christen pediatric-hospital wings, and countless others who have spoken tirelessly for the benefit of their children's children from behind podiums. Some staunch supporters, such as Fitchburg, MA resident Nicholas Charters, claimed the letter only bolsters the case for protecting our nation's future.

"We must protect our right to defend our children's children," said Charters, who is contemplating a run for a city council opening. "If not for ourselves, then for our parents, and our parents' parents, who established a great tradition of worrying about the future that stretches back nearly 300 years."

Nevertheless, a majority of those interviewed were relieved to hear their hypothetical offspring are finally taking some initiative.

"It's a load off my mind," said Martin Paller, the 32-year-old inventor of disposable, single-use bath towels. "It will be nice to take some time and focus on myself for a change."

Cartoon from Climate Cartoons. Click on the panel to read the whole strip. 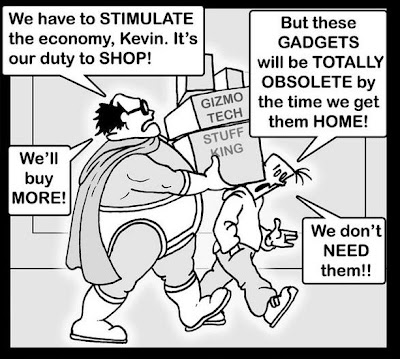 Posted by Melanie Rimmer at 1:17 pm

I see it's from The Onion, which tempers it a bit, but it still gives us another view to consider!

Americans can seem somewhat pathetic, yeah? *sigh* Hope we're not all like that.

What's this 'The Onion', Mel? It's a bit difficult for us wrinklies to keep up with all these strange "authors". I don't know how I'm supposed to read this article; tongue-in-cheek?, sceptically?, horror?,(my present reaction), amusement? Help! Please! Help!

It's a satirical online newspaper, Dad. The article made me laugh, but I'm not totally sure who it is making fun of. Environmentalists like me who are fond of begging people to save the environment "for our children and our children's children"? Politicians on both side of the Atlantic who also like using the same line to support whatever bill they are proposing? Could be a bit if both I suppose.

Anyway I haven't posted on a Sunday for a while so I I promised myself I'd post this week even if it was only a regurgitated story from somewhere else.

Hi mel, sorry this is a totally off-topic question, it's just that you seem much more technically minded than me! Do you / can you save your blog, other than just publishing here? It's just that i'm thinking i'd like to keep a copy? I guess I could wordprocess each entry and save to disk, but that seems like extra work? don't know if i can post an entry then save it??