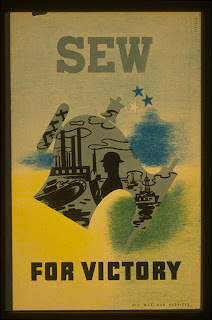 All this week I'm quilting and singing. At the rehearsal for Elijah last night it occurred to me that I enjoy the rehearsal process as much as I enjoy the actual performances. From the point of view of the audience, the performance seems to be the important thing. But if there was some way I could wave a magic wand and give a good performance without all the trouble of rehearsals, I'd hate that because often the performance passes in a flash, but the rehearsals can be a blast. Well, sometimes. Sometimes they're dull and repetitive, or really hard and tiring. But on the whole it's a thrill to get together with a hundred or so other people and create something out of nothing, polish it until it is as good as it can be, and then show it to an appreciative audience. So, much like my quilting and other crafting, I do it because I get a buzz from the process, not just as a means to an end. There are much quicker and cheaper ways to obtain bedcoverings than quilting them yourself. But they're not nearly as much fun.

Another reason I love choral singing and crafting is that the end result is unique, a consequence of the particular ingredients (e.g. the individual singers and conductor, or the particular pieces of fabric you had). To me that makes it much more precious and worthwhile than a mass-produced item. I had much more fun at the Manchester Lesbian and Gay Chorus concert I attended the other week than I have ever had at any Hollywood movie I've ever seen. Somehow the Hollywood movies have a slick, corporate feel. Even though movies cost millions of dollars to make, and I'm sure all the actors, writers, cameramen and everybody else gave it their all, yet they feel cheap and disposable to me. TV shows are usually even worse. But when I go to the theatre to see a play, or to a concert, I get a sense that I'm seeing something unique, something with an authenticity that Hollywood movies and TV shows entirely lack. My brain is engaged, not dulled, and the performers are communicating with me personally. If I nod off, or clap half-heartedly, or start doing the crossword, the performers will detect my indifference and it will put them off. But my involvement and appreciation will energise the performers to give their best performance.

When was the last time you went to the theatre or to a concert? Or to a comedy club or a folk club? How about enjoying some authentic entertainment for a change?
Posted by Melanie Rimmer at 1:00 pm

this should be your challenge for next month if you don't have one already.

I just found your blog via a post about Greek Yoghurt making on another blog (I love how this works) and am having fun looking at your previous posts...:)

I agree wholeheartedly with your post here, I'm a knitter and spinner (and there really are faster ways of getting clothes than this!) and also do lots of folk music stuff (OK, I admit it, I'm a morris dancer) and help run Oxford Folk Festival.

So authentic entertainment I think is certainly the best (we're Cropredy goers too...:)