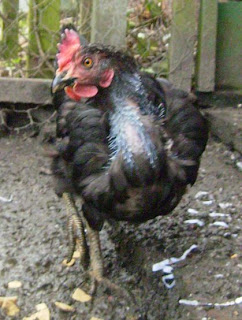 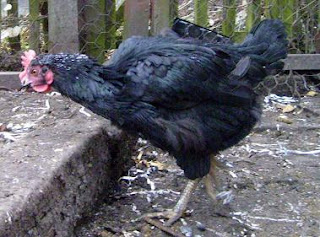 The black chicken I was worried about is looking much better. Her feathers are starting to regrow. So that means it was either:
a) mites, and the mite treatment worked, or
b) stress, but now she's not so stressed any more, or
c) an oddly-timed moult, and now she's done moulting, or
d) pecking, but whoever was pecking her has stopped, or
e) something else.

So not very satisfactory from a deductive-reasoning point of view, but a satisfactory outcome for the chicken.

Their behaviour is returning to normal. There is definitely a pecking order, with the old girls ruling the roost and the new girls as underdogs. But they are mixing more, and aren't huddling at opposite ends of the run anymore.

Egg production is up, too. We're now getting two eggs a day, which is the same as before we introduced the new girls (but they're eating twice as much food and needing twice as much attention, mucking out, topping up water and so on). So that's not entirely satisfactory either. I'm still looking forward to collecting four eggs in a day. I will tell you if that ever happens.
Posted by Melanie Rimmer at 11:34 am

Email ThisBlogThis!Share to TwitterShare to FacebookShare to Pinterest
Labels: chickens, self sufficiency

Phew, I was worrying about that chuck.