(The total lunar eclipse was a washout, with a thick layer of cloud across most of Britain. The alarm clock went off at 2:45 am, but when I looked out of the bedroom window all I could see was a bright orange glow caused by the street lights of Manchester bouncing off the unbroken low cloud, so I rolled over and went back to sleep.)

Here are ten uses for too many leftover apples, hanging around in the bottom of the fruit bowl and looking unappealing. 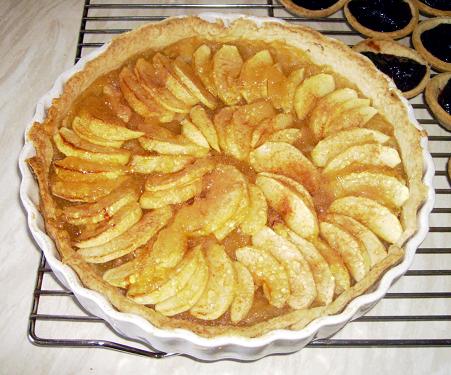 2. Gordon Tracy's Favourite Way of Eating Apples - bear with me. This is our family name for apples cored and cut into wedges, served with a dish of sugar mixed with cinnamon, for dipping. The name was a desperate attempt to trick Tom, then aged 2, into eating any kind of fresh fruit or vegetable at all. He was obsessed with Thunderbirds at the time, and his favourite character was Gordon Tracy. I offer the recipe to any parents who can't get their kids to eat fruit. Feel free to rename it with your own child's favourite fictional character. 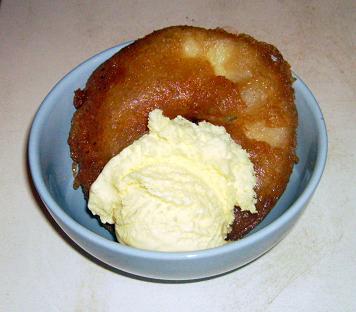 4. Cheese and apple toastie - cut an apple into quarters and grate it on a cheese grater. Also grate some Red Leicester cheese (or other cheese) and mix with the grated apple. Season with sea salt, freshly ground black pepper and ground cumin. Make into sandwiches with sliced wholemeal bread and toast (we use one of those electric toasted sandwich makers, but you can also do it under a grill) 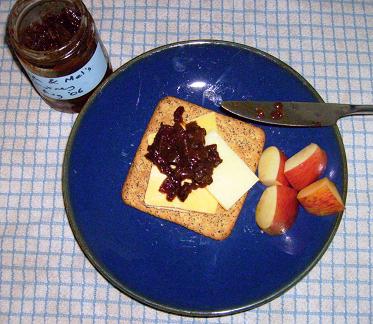 6. I often chop an apple into my porridge or muesli for breakfast. 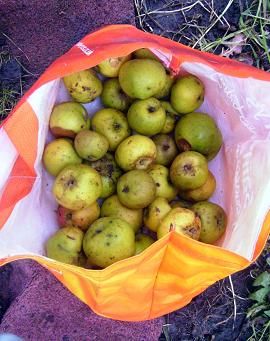 8. Stuffed baked apple - Core an apple and stuff the hole with something nice - leftover Christmas mincemeat works well, my dad keeps a jar of raisins soaked in rum to stuff apples with, or just improvise a mixture of raisins, porridge oats, chopped nuts, honey, or whatever you can find in the store cupboard. Bake the stuffed apple either in the microwave (you don't need one of those stupid plastic doodads they sell in the Bettaware catalogues, just bung it in a bowl, for heaven's sake) or in a moderate oven until the apple has softened. Serve with ice cream.

9. Braised red cabbage with apple (recipe is near the bottom of the page). 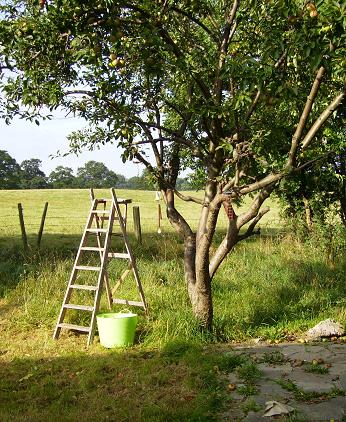 10. Apple pie - Here's a little-known secret. The best apple pies are not made with cooking apples such as Bramleys. Cooking apples turn to mush when you cook them. They're great for applesauce, and that's about it. If you want large succulent pieces of apple in your apple pie, use eating apples. But let's start with the pastry:

You can use your own shortcrust pastry recipe, or ready-made pastry or a ready-made pie shell. Here is my favourite shortcrust pastry recipe for when I'm really pushing the boat out. It makes the best ever mince pies, for example. Sift 14oz plain flour into a bowl with 1 teaspoon of salt. Make a well in the centre. Add 8oz diced softened (really soft) unsalted butter, 4oz caster sugar, 8 egg yolks (sorry - this is not a frugal recipe unless you have your own chickens and plenty of eggs. But it really does make excellent pastry) and 1 teaspoon vanilla essence into the well. For apple pies I like to add some grated orange rind and ground cardamom, cinnamon or nutmeg. Rub everything in. In fact I usually heave it all into my food processor with a dough hook attachment and let it run until it looks like pastry. Bring it together into a ball and knead it lightly, then wrap it in clingfilm and chill it for at least half an hour before using.

Divide it into two, and roll one portion out, but it's a b****r to handle, so if it falls apart when you try to line your greased 9-10” pie tin with it, don't panic. Just smoosh it back together with your knuckles, and feel free to cover any holes with leftover bits of pastry and work them in until you can't the join. Put the pastry shell, and the unused portion of pastry back in the fridge whilst you sort out the filling. Oh, and turn the oven on low.

Peel, core and roughly chop about 2lbs of eating apples. Put them in a pan with the merest splash of water, 2oz sugar and a few whole cloves, cover and cook for a few minutes until the apples are tender but not mushy. Carefully drain the apples. Don't go banging them about or they'll go to mush. Carefully put the drained apples in the bottom of the pastry shell (I don't bother picking out the cloves, I rather like the burst of tongue-numbing flavour when you bite into one in your wedge of apple pie, but if you hate that you'll have to pick them all out - I advise counting them when you put them in so you can be sure you get them all). Roll out the other portion of pastry and lie it on top of the pie. Pinch the edges together to seal the top layer to the bottom. Make a couple of slits in the top of the pie to let any steam out and stop the pie going soggy or exploding. Sprinkle generously with golden brown sugar, and bake in a low oven until it's done (I don't know how long, it depends on your oven, how big your pie dish is, how thin you rolled the pastry etc. Check on it after about 25 minutes, but be ready to give it an extra 5, 10, 15 minutes or whatever until it looks golden and done. Also listen to your nose - if it smells done after 20 minutes then maybe it is. Have a look at it and see.)

Apple pie is nice hot or cold. Either way, serve with custard, ice cream, or whipped cream. But I love it best served cold with a big dollop of smetana.
Posted by Melanie Rimmer at 9:24 am

Yumm, I found myself trying to recreate your ideas and make them gluten and casein free. I can with some of them. Very inspiring. I do love apples.~~Dee

Oh girl, you are makin me hungry

"But I love it best served cold with a big dollop of smetana."

Ma Vlast, or Bartered Bride? (that came out as battered brie first time - but that's a Glasgow speciality)

I think I've gone off smetana now I've discovered what it's eymologically related to.

Oh my gosh! You are the best! *madly scribbling recipes*

Apples are good baked with pork chops, sultanas, and rosemary.

I cannot wait to try that fritter recipe...

That is a brilliant post and one I'll be sure to come back to often for inspiration!

I love smetana ~ not easy to find outside Krym & Russia, but I think the Polish shop might have it ~ what's the Polish for smetana?

Have you tried making Apple Lakin? Or Spiced Apple Cordial?