My Bees Survived the Winter 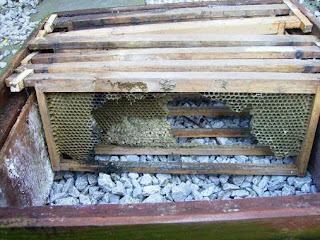 I went to check on my bees today to see if they survived the winter. I would have been very happy if one of my two colonies had survived, as I could quickly build back up to two colonies if I had at least one. But I was braced to lose them both, and have to buy bees this year. My guru, Arnie, lost six out of his ten colonies this winter, and if he can lose so many I didn't rate my own newbie chances.

To my great joy, both colonies survived! One is very strong, with loads of healthy active bees and lots of honey stores. The other colony is much weaker; few in numbers but active and with honey stores - but it has suffered terrible mouse damage. I haven't seen anything like it. Some mice made a nest in the brood box and chomped their way through honey, wax, and woodwork. The buggers! The bees must have been too drowsy and perhaps too low in numbers to attack the mice. The mice have cleared off now the weather is warmer and the bees are more active, but they've made a terrible mess. I didn't take my camera to the apiary so I can't show you the damaged hive. But I brought some stored wax combs home to clean them up. The mice have had a good munch on those too, and that's what you can see in the photo.

I'm going to take off the honey that's there and extract it, so I'll have my own honey soon! I'll melt down the damaged wax, fix up the damaged frames and give my bees new frames with new wax foundation to work on. So I'll have my own wax soon, too. Then I'll feed my bees to build them up good and strong so they'll have plenty of workers ready to collect the spring nectar when the flow is strongest. If there is any sign of varroa I'll treat them with Apistan, a thymol-based anti-varroa treatment. That's why I've got to take the honey off, because the Apistan would contaminate it.

I'm very grateful for the expert help of my guru Arnie. He also helped me compile a shopping list so I can get everything I need to get my colonies back on track. And I'm grateful for Sam's help. He was feeling quite perky by the afternoon (he was off school with a cough and a temperature) and wanted to come and see the bees, so he suited up and came with us. He wasn't at all bothered when the bees flew around him and landed on him, even on his veil right in front of his eyes. He had a good close look and was very interested in the mouse damage. Maybe he'll be a beekeeper when he grows up.

Flipping mice! Eating all my honey! Grrrr!!
Posted by Melanie Rimmer at 4:13 pm

Thank you for nuturing bees and taking care of them. That is so wonderful.

Sorry about the intrepid mousies. That's a real bummer.

I'm quite jealous of your beehives, I've just finished reading 'The Secret Life of Bees' and I've forgotten the author, but it's a novel byt beekeeping is central to it and there's a lot of bee folklore in it. I'm sure you'd find it interesting if you've not read it already.

If your feeling really brave, my little one is still after an explanation of how bees make honey from spit and nectar! Thats Bee Movie for you!

keep up the good work!

Another good honey history book is "Robbing the Bees" by Holley Bishop (sorry if repeating this info).

I love hearing about your bees and hives and hope to hear much more about them this season.