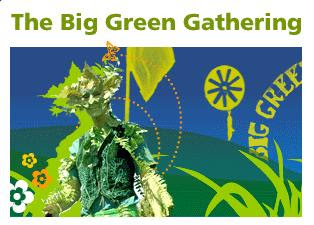 You may recall that the Big Green Gathering was saved by the 11th-hour intervention of a mystery "white knight". Well the BGG's January newsletter revealed that the white knight is Stuart Galbraith

...whose previous productions included the Live 8 concert in Hyde Park in 2006 and the Live Earth concert at Wembley in 2007. Stuart's new company, Killimanjaro Live Ltd. (KLL), is providing the finance to settle our debts, but the BGG's democratic one-share-per-person structure has ensured that we retain the control of the company and the event.

The newsletter spells out emphatically that the BGG has not been taken over, it hasn't sold out, it hasn't diluted or altered its original vision.

I don't get the impression, though, that Stuart Galbraith is prepared to pump money into a bottomless pit, so BGG still needs to be able to be profitable (as it always was until Mendip District Council and Avon & Somerset Police added around £120,000 to the costs). So the board of directors decided to increase the cost of shares in BGG to £80 from March 1st. If you hurry, you can still buy a share (you're only allowed one each) at the original price of £40. Go to The Big Green Gathering website to apply for a share in the most exciting green festival in Europe.
Posted by Melanie Rimmer at 4:49 pm