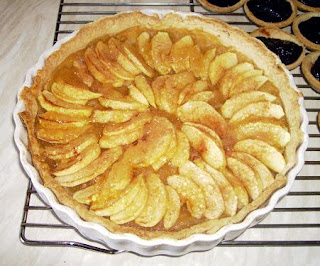 I don't want you to get the impression that frugal cooking is all about eating stringy burned meat just because I'm too stingy to throw it out. How about this tarte tatin? The kids were moaning they were hungry so I told them there were plenty of apples in the fruit bowl. But apparently the apples "weren't nice ones". I had a look - yes, they had been there a bit too long and were starting to look wrinkly and tired. There were also two cooking apples I bought a couple of weeks ago but I can't remember why. A recipe to use up cooking apples and eating apples? Tarte tatin of course.

Peel, core and chop a couple of big cooking apples. Toss them in a pan with a splash of water and 5oz light brown sugar. Cook until they're soft, then mash them and dump the puree in a sieve to drain - save the liquid that drains off them.

Fling 10oz plain flour, 5oz fat (I used half Pura and half margarine), and 2oz sugar in the food processor and whiz until blended, then add a little cold water until it comes together.

Roll out the pastry thin and use it to line a greased quiche tin. Spread the apple puree in the bottom of the pie. Peel, core and slice a few eating apples and arrange them on top of the puree. If you have nice red eating apples you don't need to peel them. Bake at 200C for about half an hour.

Take the liquid you kept from straining the apple puree and boil it until it is reduced. Brush it on the cooked tart to glaze, and sprinkle sparingly with cinnamon.

If you think my glaze looks a bit lumpy, you're quite right but don't panic - yours won't be. Eleanor came in crying at a crucial moment because she had fallen over and skinned her knees. By the time I had cleaned and band-aided her and given her a cuddle, my glaze had begun to congeal. That's family life.

By the way, this recipe makes too much pastry for one tarte tatin, so use the leftovers to make jam tarts. Roll the leftover pastry thin, cut into rounds, and place them in a greased jam tart tin. Put a dollop of home-made jam in each one and bake for 15 minutes. If you put them in at the same time as the tarte tatin, they'll be ready to eat just in time for a little girl with skinned knees. Very convenient.

UPDATED: The little boy from over the road came to play, helped eat all the jam tarts, and then asked me to write out the recipe so he could get his mum to make them. He also said his granny made the best pastry in the world and it tasted just like mine. That's what I like to hear.
Posted by Melanie Rimmer at 12:51 pm

Looks gorgeous,wish I was coming for tea!love from Kathyann and the girls

Lovely blog, Mel. Informative, amusing, caring. Thankyou for cheering an old man up at the end of a stressful day.

Wow! That looks yummy. Must give it a go soon.

I love your kids' observation that the apples "weren't nice ones". We always used to feed our wrinkly apples to the pigs, but now I shall have to give your recipe a go.

I love this post and I also love Tarte Tatin...mmm, I can see what I am going to make over the next few days. ;-)

Hi,
I've been reading your blog for a while but don't comment very often! Just wanted to say that this recipe looks very inspiring and I now know what to do with some of our stored apples that have seen better days!

Technically, tarte tatin should be made upside-down, baked with the pastry on top of the apples, and then turned over before serving.

oh I'm glad someone else said that - was beginning to think it was just me that thought a tarte tatin was somethig else!
still looks good though

Ha ha I was just going to be a true pedantic French resident and point out that Tarte Tatin is made upside down but some other person has already pointed it out. Your French-style apple pie looks lovely though ;-)
I find Tatin hard, my apples sometimes get stuck: you caramelise them in the pan first them lie the pastry over them, tuck it around the sides then in the oven. It's the turning upside down part that gets you into trouble!!