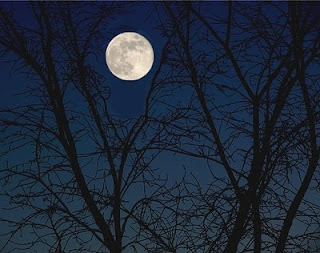 I'm writing this on the evening of December 23rd, and as I sit at my computer desk I can look out of the window at the almost full moon, framed in the bare branches of an oak tree, and surrounded by a halo of ice crystals. It's astonishingly beautiful. I'll post this on December 24th, which is a full moon as well as being Christmas Eve .

There's a full moon each month (sometimes there are two), and each month's full moon has its own character. A full moon in December is in the sky a long time, because December nights are the longest of the year (in the Northern Hemisphere). So one of the names of December's full moon is Long Night's Moon. Since tonight's full moon is just two days from the winter solstice, it's about as long as it can possibly be. Other names for this full moon include Winter Moon, Snow Moon, Frost Moon, Oak Moon (appropriate for me) and Moon Before Yule.

Thanks to KerrDeLune of Beyond the Fields We Know for permission to use the image. Like me, she blogs about the cycles of the moon and sun, and the turning of the seasons. She's also a far, far better photographer than I am.
Posted by Melanie Rimmer at 7:58 am

Thanks for these observations about Long Night's Moon. It was indeed beautiful last night.
Happy Christmas to you, and thanks for all your interesting writing. i don't comment as often as I should, but I always enjoy your stuff. (And I'm definitely going to get a ginger-beer plant going in the new year!)

That is a wonderful shot. We tried to get a picture of our full moon, but it didn't work well. Hope you had a Merry Christmas!

Merry Christmas all. My daughter has had a wonderful time pointing out the moon whenever she catches sight of it. It's been huge when viewed from the kitchen window these last few nights. Huge and cheerful.