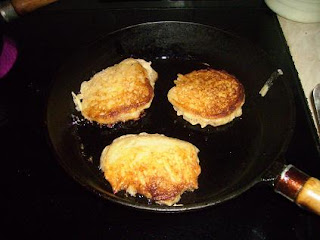 One of the nice things about baking sourdough bread daily is that you always have a dish of sourdough starter hanging about. Sourdough starter is flour and water which is fermenting - in other words, it's batter. So you can quickly cook anything that requires batter. I already posted a recipe for sourdough pancakes. I forgot to photograph my sourdough onion rings, but next time I make them I'll tell you all about it. I've plans to make sourdough apple fritters sometime soon. But today I want to show you my sourdough potato latkes.

It's basically the same recipe as the potato latkes I blogged about in July:

Grate two pounds of peeled potatoes and soak in cold water for at least a couple of hours. Strain the potatoes and dry them well, for example by wrapping in a tea towel and swinging them round your head. Do this outdoors. And don't blame me if you accidentally let go of a corner and decorate your garden with grated spuds. If you're chicken you could just pat them dry between sheets of kitchen paper. Put the potatoes in a large bowl and add a grated onion and plenty of freshly ground black pepper and sea salt.

But then instead of making batter from scratch, I took a cup and a half of sourdough starter. I added a beaten egg, a splash of milk and half a teaspoon of bicarbonate of soda. I mixed the spuds with the sourdough batter, then fried dessertspoonsful of the mixture in butter, in a frying pan.

You can serve them as a side dish with roasted stuffed butternut squash, as I planned to do. But apparently they taste better red hot from the pan, stolen from the cook, and eaten with your hands burning your fingers in the process.
Posted by Melanie Rimmer at 8:45 am

I don't understand all the "soak for hours and spin in a towel" stuff with latke grated potato - all I do is pop the gratings in water while I'm gratings, and then as soon as I've finished squeeze-dry the gratings in my hands - the latkes (or rostis) are perfectly fine without all that palavar!

It might depend on the variety of potato, or just personal taste. I find that if they're unsoaked, they sometimes taste unpleasantly "raw" and starchy. The soaking takes that away.

Ooh, I can smell them, and hear them sizzling contentedly. I'm back in your kitchen just looking at those.
Last week we had mashed potato and cabbage left over from our Sunday Roast, which we fried into 'caa'd warmed up', as they say in the North East of England.

Oh, Yellow ! Don't get me started ! Caad warmed up, panackilty, puddin's in the corner, stotty cake, pease puddin' an' saveloys. God, I could go on and on. Mind, these latiky things sound canny though but!