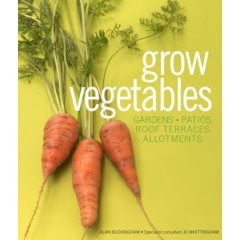 Dorling Kindersley very kindly sent me some books to review. I'm very glad to receive free books. I'll also review CDs, chocolate and wine if anyone wants to send me some. One of the books they sent me was Compost by Ken Thompson, which I reviewed in March. The other is Grow Vegetables by Alan Buckingham.

As you'd expect from a DK book, the photography is gorgeous and the design is attractive and easy-to-use. Throughout the book, the author has borne in mind the different situations people might want to grow vegetables, from an allotment or a large garden down to a small veg patch in an ornamental garden, a patio, balcony or windowsill. There is something for everyone here, although if all you have is a windowsill you may prefer to borrow the book from the library rather than pay £16.99 for it.

The book seems to be aimed at beginners. For example it includes some extremely basic stuff, such as what does a hoe look like and what is it used for. That's a good thing - we all had to learn at some point, whether at our granddad's knee or from a book at a more mature age. All the basic stuff is covered in the first couple of chapters, titled The Perfect Plot and Vegetable Grower's Know-How.

After that it gets down to business, with sections dedicated to Cabbages and Leaf Vegetables, Root and Stem Vegetables, Peas and Beans, Salads, Fruiting Vegetables, Cucumbers and Squashes, Perennial Vegetables and Herbs. I think that's a very sensible way of dividing them up, collecting together types of vegetables that are cultivated in similar ways. It's better than putting them in alphabetical order as so many books do. That way runner beans, climbing French beans and dwarf beans are all in different places. If you want to look up a particular vegetable by name, there is a comprehensive index in the back of the book.

Within the chapters, each vegetable has a photograph, a description and instructions of how to grow it, and a little chart showing the "season". This shows you when to sow, transplant, and harvest the veg, but it only splits it into spring, summer, autumn or winter, rather than telling you the month. I think I understand the reaosning - not everyone lives in the same growing zone. I know that Stonehead in Aberdeenshire has a shorter growing season that we do in North Cheshire, whereas Stuart and Gabrielle of Permaculture in Brittany have rather longer. But I feel that just stating the season rather than the month is so vague as to be pretty useless. Almost all the vegetables say "Sow in spring, transplant in summer, harvest in summer or autumn". Well, duh!

However all is made up for in the following chapter, Vegetable Year Planner, which gives a month-by-month rundown of what to do in the vegetable garden each month. The final chapter is the inevitable Vegetable Doctor. It's the scary one with all the pests and deficiencies and diseases that might strike, very sensibly left to the end so hopefully it won't put anybody off.

The bottom line? I don't think I'll be offering this book as a competition prize, I think I'll be hanging on to it. That's probably the best review I can give.
Posted by Melanie Rimmer at 10:00 am

Hi Bean Sprouts,
Had my first veggies from the patch this morning,beautiful scarlet globe radishes....yum yum

It's much better to work by the first and last frosts than by season or week. We've had frosts as late as May 22 since we've been up here so we have to bear that in mind when sowing and planting out. Making up for the shorter season, we do have longer days.

Oh, you remind me of when I used to work for Dorling Kindersley many years ago when they were smaller. At that time (I doubt they do it now) they used to give a free copy of every single book they published to all employees. It means my book collection today is richer than I would otherwise have been able to afford.
They also, of course, used to publish John Seymour's stuff, and I had the pleasure of meeting the great man once when he came to the office. Having been a fan of his for years, I found myself unable to come out with any intelligent remark whatsoever!

Hey! Thanks for the great advice on finding out how to grow vegetables. I plan on picking up Grow Vegetables! I was browsing through a bunch of green websites and blogs and I came across yours and found it very interesting. There are a bunch of others I like too, like the daily green, ecorazzi and earthlab.com. I especially like EarthLab.com’s carbon calculator (http://www.earthlab.com/signupprofile/). I find it really easy to use (it doesn’t make me feel guilty after I take it). Are there any others you would recommend? Can you drop me a link to your favorites (let me know if they are the same as mine).