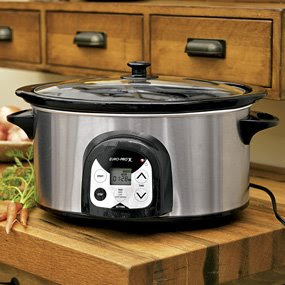 This is the third in a series of articles comparing pressure cookers and slow cookers. The first article compared the nutrient content of food cooked with these methods. The second article looked at similarities between them. This article is about the differences between them. But first, a quick quiz:
If you answered "yes" then you'll probably love a slow cooker. You can prepare a meal in the morning, leave it cooking all day, and come in from work to a delicious home-cooked meal with no more work to be done.
If you answered "yes" then you'll probably love a pressure cooker. You can fling some ingredients in it and put it on the hob, then enjoy tender meat and thoroughly-cooked vegetables in a fraction of the time. But as you probably spotted, you can cook similar sorts of foods in both of them.

The main difference between them is how they work. A slow cooker uses a low heat for a long time. The food never reaches boiling point, but over several hours this low heat is enough to cook vegetables and meats right through. The slow cooker plugs in to an electrical outlet - you don't need a stove. I wish I'd had one when I was a student in halls of residence. A slow cooker draws very little power because it doesn't boil the food, so it's cheaper than conventional cooking methods. Many types of slow cooker have a removable crock that can be used as a serving dish. The lid on a slow cooker just sits lightly on top of the crock, it isn't sealed.

A pressure cooker lid, by contrast, has a tight seal. The lid contains a valve with a weight on top, so as you heat it on the hob the pressure builds up inside until the pressure is great enough to push the weight up and release a little bit of steam with a loud hiss that scares some people. This makes the pressure drop inside so the weight falls and the pressure starts to build up again. (There's really no reason to be scared of pressure cookers. They make a loud hissing noise, but there's nothing that can hurt you. They're a damn sight safer than a stepladder.) Because it is operating at more than atmospheric pressure, the temperature inside the pressure cooker reaches more than 100°C. A pan of stew or soup on your hob, with or without a lid, will never get hotter than 100°C. At this pressure and temperature, the food cooks much quicker, using less electricity.

Because of this, I use my pressure cooker a lot for cooking dried beans and pulses. Beans take hours to cook on the hob, so the pressure cooker saves a lot of time and money. Some beans (particularly red kidney beans and soya beans) contain toxins that are destroyed by heat. The high temperatures in a pressure cooker are more than enough to destroy these toxins so this is a safe way to cook dried beans. But you should never put soya or kidney beans in a slow cooker without cooking them first to destroy the toxins. The Vegetarian Society recommends pre-boiling all varieties of dried beans before slow cooking. Tinned beans of course are perfectly safe.

Every time I read about boiling pulses I recall an article in either Good Food or Vegetarian Good Food years ago, where they tested cooking times for pulses and what was best for getting rid of toxins etc.

The article was published in autumn. The work was done, in a small kitchen, at the height of a very hot summer...

I do actually use the article, but every time I have to search for it in amongst all the recipe cuttings.

Mel, I'd just like to mention that a pressure cooker can be used in conjunction with other cooking methods to speed up the cooking of, for example, root vegetables.

I nearly always cook potatoes, carrots and parsnips in the pressure cooker, the potatoes at the bottom, in the water and the other vegetables in baskets on top. It cooks them really quickly and preserves the vitamins.

This way, you can have freshly cooked vegetables with your slow-cooked stew.

I know you're really only comparing slow and pressure cookers, but I'd like to point out that microwaves cook green vegetables extremely quickly without any detriment to the taste such as you get with microwaved potatoes.

So if you get up early enough to start off the stew, you can save time by preparing the vegetables when you get home and cooking them really quickly.

It's perfect for those bags of washed spinach, because you only have to make a hole in the bag and you can cook them without a container and the spinach doesn't go all mushy or get watery.

Not wanting to be a boring old poo or anything, but how does the temperature go for the slow cooker? Meat needs to be cooked at a temp of at least 65C otherwise you could be putting yourself at risk from various food poisoning bacteria. Sorry! I was a chef and this kind of thing got pummelled into me.

I still want one though.

Mildew - The Wikipedia page about slow cookers says "A typical slow cooker operates at (more or less) 80°C (176°F) on low, 90°C (194°F) on high, and 1 hour at 90°C followed by 80°C on medium". Googling for "slow cooker temperature" I found several other pages that concur with those figures. But you're right to be alert about food poisoning. The leaflet that came with my slow cooker said it is importnt not to put frozen or partially frozen meat in the slow cooker for this reason - it would take too long to come to a safe temperature and bacteria would have time to muliply if you did.

Remember that 65-70 is very very low for a normal cooker (just above tick-over for most I would think). And I'm sure the slow cooker designers are well aware of the need to get meat to a minimum temp.