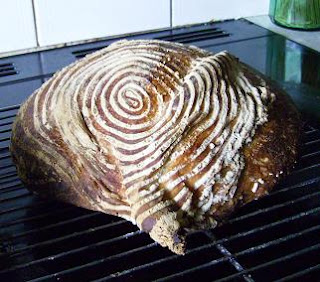 Perhaps foolishly, I tried several new (to me) breadmaking techniques all at once. I followed this recipe which promised light, holey bread due to very wet dough and minimal kneading. If you're interested in bread making, watch the video linked to on that page - it's amazing. He just sort of folds the bread over five times. It takes 10 seconds. It's supposed to replace ten minutes of energetic kneading and lead to much lighter bread.

As well as a new recipe using new techniques, I also tried to prove my bread in my new cane bannetons which give this bonny spiral pattern. However my dough wouldn't turn out of them properly. It stuck and formed this strange melted appearance. 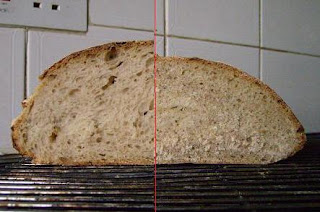 But look at what happened when I cut it. That's today's Dali bread on the left, and yesterday's loaf on the right. Look how much more risen today's bread is, and look at all the big holes. It's light and easy to eat. It doesn't make your jaw ache. It's not dwarf bread.

It's a life-changing experience. I'm never making dwarf bread again. I'm never kneading again. I'll have biceps like a normal person, not like Dolph Lundgren. The bread looks weird on the outside but I'm sure I can fix that. On the inside it's beautiful, and that's what counts.
Posted by Melanie Rimmer at 2:17 pm

Email ThisBlogThis!Share to TwitterShare to FacebookShare to Pinterest
Labels: baking, food, self sufficiency

That is seriously impressive!

The photo reminds me of those fabric-softner adverts with the two piles of towells next to each other.
I love the spiral pattern on the bread.

Wow, I've had some breadmaking revelations but never anything like that.

I'm very surprised that a wetter dough means a lighter dough. I usually find that the more wet my dough is, the more heavy it ends up.

My trick up until now is to give it less water than I think it needs and it softens up in the proving process so it's not overwet.

I will definitely be trying this (maybe even today)!

Light fluffy homemade and wholemeal bread is the holy grail for people like me and my partner!

Great photo/s ;) Where did you get your proving baskets? It's SO difficult to source good breadmaking equipment in the UK

Wow! That is an amazing difference and wonderful that the better bread is produced from the easier method. Sure seems like it's usually the opposite...

I used to make bread a lot and then stopped - but I think you've inspired me to start again!

This is just to tell you that the link you sent for the Garden Blogger's Carnival is in today's post on the Balcony Garden.

That top loaf, Mel. Shades of Newgrange, or what?
(p.s. Who's Dolph Lundgren?)

Your blog is really great! I love it. Do you mind, that I link you on my blog?
greetings,

Thanks Ewa. I've visited your blog and I like it too. Great photography, and your garden looks stunning. So peaceful. I've added it to the "Gardening Blogs" section in my blogroll, and I've subscribed to your feed. I'd love you to link back to Bean Sprouts.

Thanks for participating in the Carnival of Recipes this week!