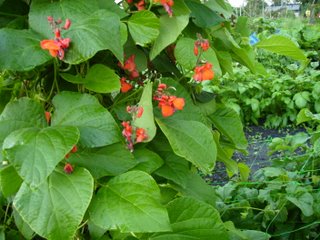 It's a race against time on the allotment now. There are still red flowers on the runner beans, and baby courgettes on the courgette plants, but the average date of the first frost in this area is just a few weeks away and that will kill them both. The beetroots will stay in the ground - it rarely gets cold enough here to freeze the ground solid - and the spuds might be OK if I'm lucky but the carrots need to come up before then.

So what have I learned in this first short season of having an allotment?
Runner beans are fun and easy to grow. But I should stick the canes more firmly in the ground or they blow over in high winds. And don't plant so many! They're heavy croppers and although I can hide them in stir fries and stews, and finely sliced in salads, none of the family much like a pile of steamed runner beans on their plate as a side vegetable.
Yellow courgettes are also easy and fun, and nicer than the green ones because they're less bitter. They're also heavy croppers. We had three plants this year and I think that was a good number.
Butternut squash on the other hand are far too big for a small plot. Just one plant has taken over the whole damned place, although it only has a few fruits on it. It's done for my pea patch, by growing over all the peas and shading out their light. I've heard you can train squash to grow up canes, perhaps that would work better than just letting them sprawl over the ground. Still it was heartening to see something growing so vigorously on the plot.
Plant sorrel indoors first before planting it out. I put a whole packet of seeds in the ground under varying conditions and at different times, but none of them came up.
Posted by Melanie Rimmer at 9:39 am

What a shame we don't live nearer. There's nothing I like better than a large pile of steamed runner beans on my plate, with just a teeny smidgen of butter. I think that after tomatoes, which are really fruit, they're my favourite vegetable.