Are The Floods Due To Climate Change? 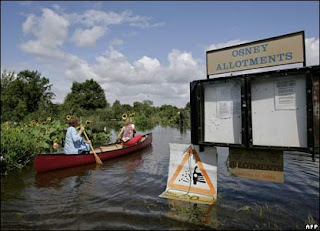 Are Britain's floods caused by man-made climate change? I've heard the question asked by TV journalists a lot recently, and the usual answer is "We can't tell". A better answer would be "The question doesn't make sense". I'll explain why:

It's a bit like rolling a dice. If you roll a normal dice hundreds of times, you'll roll a "1" one time in every six. But imagine if I gave you a loaded dice that rolled a "1" one time in every three. Now you roll the dice a few times until it rolls a "1". "Is that 1 due to the fact the dice is loaded?" you ask. But the question doesn't make any sense.
Having a loaded dice means that the overall pattern of dice rolls changes, compared to a normal "fair" dice. But any single dice roll is a random occurrence based on the characteristics of the dice. So climate change means the overall pattern of our climate is changing, but any single weather event is still a one-off unpredictable occurrence.
Would we have had floods in Britain in 2007 if it weren't for climate change? Well, maybe we would, maybe we wouldn't. All you can say with certainty is that climate change means we'll have extreme weather more often than in the past.
Posted by Melanie Rimmer at 1:58 pm

Email ThisBlogThis!Share to TwitterShare to FacebookShare to Pinterest
Labels: news

One thing for certain, the floods wouldn't have had such an impact if Man hadn't built their settlements on floodplains, and later tried to "solve" the problems by building flood defences (which, of course just aggravate the problem further down-river)

So even if the floods can't be blamed on climate change, they certainly can be blamed on the way we choose to populate this country!

For extreme weather conditions, I can remember even further back. To 1947 to be precise when we lived on farmland on the outskirts of Sunderland. That was a terrible winter with the army out helping to clear the major roads while country lanes like ours were just left. The snow was so deep around us it buried the first floor of our house and, when my little sister fell ill, my father had to dig his way out, which took him hours. The doctor couldn't make it out to us in time and my four/five year old sister, Christine, died. Yes, a terrible winter, the like of which I've never seen since.