All eight of us (five of us Rimmers and Steph's family) went to the Chadkirk Festival yesterday. The weather was glorious and we all overheated in our jumpers and raincoats. The festival is small enough to get round easily but big enough to be interesting. There were people in period dress doing folk dancing, stalls selling local crafts and stalls promoting local charities and organisations, and other interesting things going on including a chainsaw demonstration and a beekeeping demonstration.

The main reason I wanted to go is that one of my bee guys told me he was doing the beekeeping demonstration there, and if I brought my 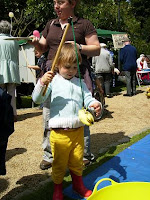 beesuit I could go behind the scenes. I couldn't imagine what a beekeeping demonstration might involve so I was fascinated.

It turns out that he has several hives in the walled garden of Chadkirk chapel, surrounded by a seven-foot high mesh screen. So people can see the hives, and the bees coming and going, from close-to, but the bees mostly fly off at well over head height so don't cause any problems to passers-by. The demonstrator stands around in his beesuit and answers questions from the public. I got to go inside the screen and look at all the different kinds of hives, including the familiar Nationals and WBCs, and also the more exotic top-bar and Dartington hives.

Stephanie chatted to the mayoress, the kids all made puppet dragons, and won prizes by hooking plastic ducks in a bowl of water, and we all ate ice-cream and had a super time. The festival is also on today so if you're in the area I'd recommend you go along. Admission is £1 for adults, free for children.
Posted by Melanie Rimmer at 9:25 am

Not sure where to find the subversive frugal thing....

I love your blog.

Bugger! Only just read this entry on Sunday night and Chadkirk isn't that far from me. Well, at least you've reminded me I haven't visited in a while and I must go soon.

Steph (Hedgewitch from DS, not you sister!)