Review: Guide to Bees and Honey 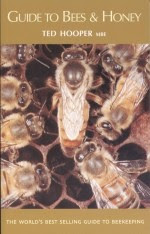 Ted Hooper's Guide to Bees and Honey is the beekeeping bible. There are a heck of a lot of books about beekeeping available and I'm prepared to bet that each of them contradicts all the others in significant ways. But Ted Hooper is universally regarded as the last word.

So what, if any, are the drawbacks to a book which unites all beekeepers?

If you keep bees, or would like to keep bees, and are British, you really have to own this book. Make sure you get an up-to-date version. The early editions pre-date the varroa mite, for example, and other important recent developments in British beekeeping, but the latest editions have been brought up-to-date. Once you know the book inside out and back to front, you can choose to ignore the advice in it and keep bees your own way. But when you are starting out you should follow Hooper's advice closely, and you won't go far wrong.

I agree, this is my no.1 book too. Any book I've read about bees seems to assume its not a beginner reading, and so as you say, large gaps in how to get from a to b are missing.

When collecting my first hive a couple months ago, they were strapped like yours, and had a sponge pushed into the entrance hole by the owner. I then threw a drape of agricultural fleece over the hive in my boot, and brought a bottle of sugar syrup so that if they did escape while driving a quick squirt of sugar would get them to sit still and groom! Luckily the drive was uneventful!

Hedgewizard asked me if I'd seen your post on a starvation swarm .. I can't find it, what month/year is it in?